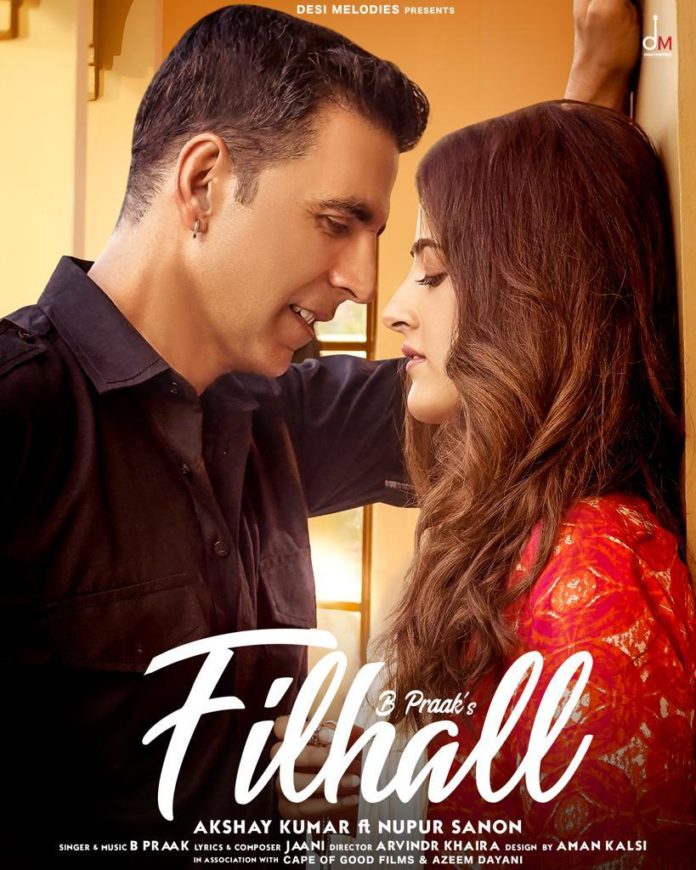 After unveiling the teaser a few days ago, the makers of music video song Filhall have finally released the full song today. There has been a lot of buzz around the new song as it marks the debut of Akshay Kumar in the world of music videos.

Titled Filhall, the melodious song portrays the unfulfilled love of Akshay Kumar and Nupur Sanon, Kriti Sanon’s sister who is making her debut with this song.

The video starts with showing them madly in love but unable to get married. Years later, the two meet in a hospital in a totally unexpected situation. Several things have changed over the years but their love for each other has not.

Filhall depicts the story of that true love which is pious, selfless yet incomplete.

The song is crooned by Punjabi singer B Praak while Jaani has written and composed it. Arvind Khaira has directed the video.

Akshay Kumar took to his social media account to share the song with his fans. He wrote along with the post, “After being in the industry for so long, I decided to make my music video debut because some things are better felt than explained. Presenting #Filhall!”

Talking about his collaboration with B Praak, Akshay said in an interview, “Having experienced the magic of B Praak’s voice firsthand with Teri Mitti from my film Kesari, there was not much needed to convince me to come on board for Filhall. And to top it off the lyrics are so beautiful, it’s impossible to not feel anything. When I met with the lyricist, Jaani he told me it’s his best written song till date and I couldn’t agree more. This brilliant combination of a soulful voice and lyrics to match got me to make my music video debut.”

Debutante Nupur had admitted that she was nervous to share the frame with Akshay but the actor had welcomed her positively, “It was my first acting assignment, and that too with such a big star, so I had butterflies in my stomach. I was nervous on the first day of the shoot as I had not met Akshay even socially before. But he was warm, and we bonded over our Punjabi connect. I kept on asking him questions on how to go about it. He calmly told me, ‘You are doing good. If I think I need to guide you, I will’,” said Nupur.

Check out the full song below: