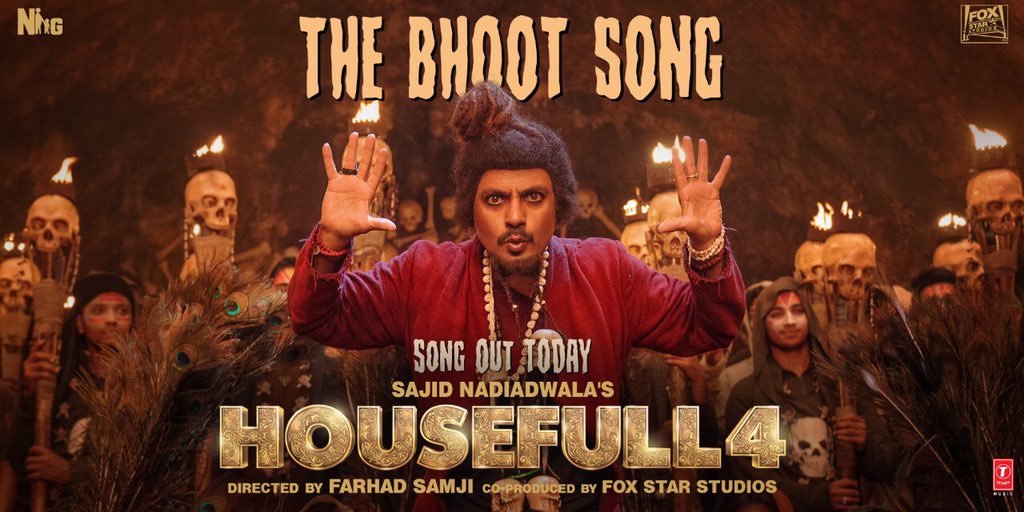 The new song of the upcoming movie Housefull 4 has been released today. The peppy track features Nawazuddin Siddiqui and Akshay Kumar where the former performs some crazy exorcism on the latter to ward off some evil spirit. The end result is hilarious. The song which has the entire star cast in it is sung by Mika Singh and Farhad Samji while the music of the song has been given by Farhad Samji, Sandeep Shirodkar. Ganesh Acharya has choreographed the song and Farhad Samji has written the lyrics.

The two songs of Housefull 4 released earlier have been creating quite a buzz across the social media especially the second song ‘Shaitan Ka Saala’ which shows a bald Akshay performing quirky dance moves with several female background dancers. The song has also given rise to the #BalaChallenge where the fans and friends of Akshay Kumar attempt to imitate the trademark dance moves of the actor.

The comedy Housefull 4 is slated to released on October 25 and stars an ensemble cast which includes Akshay Kumar, Bobby Deol, Riteish Deshmukh, Kriti Sanon, Pooja Hegde and Kriti Kharbanda in double roles as the story revolves around their reincarnation spanning a period of 600 years.

The film is fourth instalment of the Housefull franchise and is presented and produced by Sajid Nadiadwala’s Nadiadwala Grandson Entertainment and co-produced by Fox Star Studios, directed by Farhad Samji. The film was supposed to be directed by Sajid Khan, who had also directed the first two installments. He was later replaced by Farhad Samji due to accusations of sexual harassment against him. Samji also co-directed the third installment of the franchise.