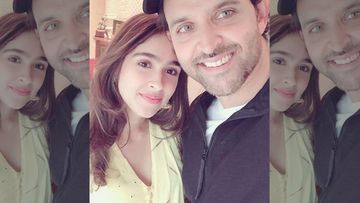 Twenty years after her cousin brother Hrithik Roshan made his Bollywood debut with the super hit Kaho Naa Pyaar Hai, Pashmina Roshan is all set to make her entry into Bollywood next year.

Pashmina is the daughter of Rakesh Roshan’s (father of Hrithik Roshan) brother Rajesh Roshan who is a music composer and has given music for films like Kaabil, Krrish 3, Kites, Krazzy 4, Krrish, Koi… Mil Gaya, Julie, Yaarana, Karan Arjun, Sabse Bada Khildai, and others.

The interesting thing about Pashmina’s debut is that she will not be launched by her uncle Rakesh Roshan. Instead, an established production house will launch her, according to a report on Mumbai Mirror. She is even already in talks with top banners.

The report quotes a source as saying, Pashmina has a strong theatre background and has done a six-month course from Barry John’s acting school in Mumbai. She has also trained with theatre-actor Abhishek Pandey, actress-director and recipient of the Sahitya Natak Akademi Award, Nadira Babbar, and American playwright Jeff Goldberg.”

Pashmina has already started working as actor. In March this year, she made her stage debut with the Indianised adaptation of the Oscar Wilde play, The Importance of Being Earnest, produced and directed by Goldberg with whom she has trained for nine months.

Hrithik is very excited about Pashmina joining the films and announced that he couldn’t wait to see her on screen. He has been personally guiding and mentoring her.

Pashmina will be the third generation in her family to join the films as her grandfather Roshanlal Nagrath, better known by his first name Roshan was also a celebrated music composer who has given us some unforgettable melodies like Na to karavan ki talaash hai, Jo vada kiya vo nibhana padega, Nigahen milane ko jee chahata hai, Laaga chunari mein daag, Rahen Na Rahen Hum and others.

Hina Khan looks pretty in THESE sun kissed pictures, check it out
Hansika Motwani gives travelling goals with her pictures from Turkey, check them out
Comment