It is very true that in tinsel town relationships are formed and broken with the release of a movie and its subsequent failure or success. Sometimes if a pair works onscreen the relation also tends to last, even if it is only a facade. A similar recipe is possibly cooking among the Dhadak debutants Ishaan Khatter and Janhvi Kapoor. If reports are to be believed their alleged hook up is in all possibility a mere publicity gimmick to attract all eyeballs before the release of their movie.

The duo is going to be seen together in Karan Johar’s Dhadak which is a hindi remake of a popular Marathi movie Sairat. Be it movie screenings or gyming together, the two newcomers are always seen together. Their movie is a romance drama so it is only plausible that the news of their real life romance is fueled in order to cater to the popularity of the movie and to divert attention to their chemistry even before it is released.

A source was reported saying, “The makers know how much fans and media love Bollywood love stories. And Ishaan and Janhvi’s film is a tragic love story, where the two characters are hopelessly in love with each other. A real-life romance angle just adds to the interest around a film with such a subject”. It certainly adds up. 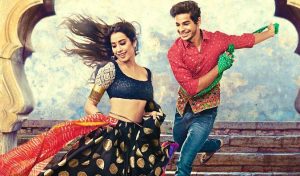 Karan Johar is known for attracting all sorts of attention. After rendering immense popularity to the trio of Siddharth, Varun and Alia in their first film, he would leave no stones unturned to achieve a similar outcome for Ishan and Jahnvi.

The source also stated that it isn’t very difficult to come up with such rumours. “It is not difficult to plant stories about a couple’s affair and then have them hang out together, attract media glare, to fan the relationship rumours. If at all, all the media around Ishaan and Janhvi’s closeness to each other will only help their debut movie,” the source revealed.

After all the hook ups and break ups that we’ve seen over the years owing to the release of a film, it won’t come as a surprise if this alleged affair also comes true by the time the movie releases.

Ayushmann Khurrana: “It is important to have your own space as an actor”
Elli Avram speaks on rumours about her affair with Hardik Pandya