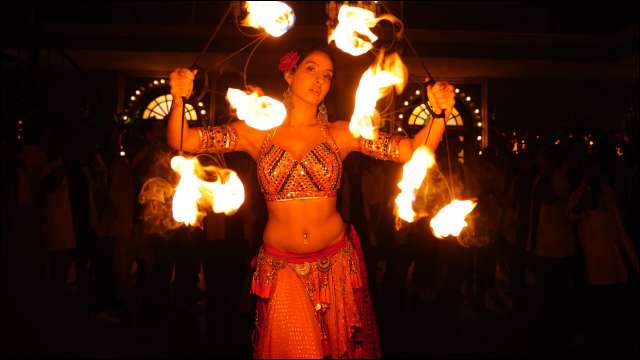 John Abraham who is giving back to back Nation oriented drama movies on Box office is all set with its upcoming “Batla House” fell into the same stream.

The makers of the movie are out with its first dance number, featuring Nora Fatehi.

The song is present on the OTT platform: YouTube

The two minutes and nineteen seconds song “O Saki” is a recreated version of “Saaki Saaki Re” from 2004 film Musafir, presenting Nora Fatehi, who is glancing in her elegant belly dance moves, she is setting the stage on fire.

The song is sung by Tulsi Kumar, Neha Kakkar, B Praak. The track is recreated and written by Tanishk Bagchi. The song is originally composed by Vishal- Shekhar.

A few days back, the trailer was out that lead the audience into sheer excitement it proceeds to demonstrate Sanjeev noting and leaves you interested in the occasions.

The plot of the film is inspired by true events “Operation Batla House” that took place on 19 September 2008. John Abraham reprises a lead role as a police officer named Sanjeev Kumar Yadav.

The movie is produced under the direction of Nikkhil Advani, which also star Ravi Kishan and Nora Fatehi. It is slated to hit the theatres on 15th August 2019.

“Tham Sa Gaya” : New youtube video by The Timeliners will make you cry
Ishaan Khatter and Ananya Panday will team up in Ali Abbas Zafar’s next
Comment