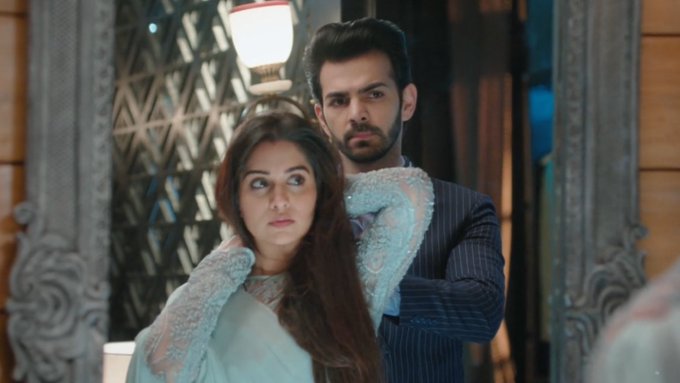 The upcoming episode of Kahaan Hum Kahaan Tum begins with Rohit approaching Rani, and telling her to get out of the house. There’s a brief flashback, which takes us back to the scene of Deepa, YK, Akash and Nishi discussing about Rani and Pooja. Deepa demands to know the truth, but Nishi tells them to just wait and see why Sonakshi made a mistake by inviting her to their house. YK relents, and is about to tell the truth, when Veena interrupts their conversation and calls them downstairs for lunch. Sonakshi tries to apologize to Rohit, but he’s rude to her. Veena is afraid about the possibility of Naren watching Sonakshi’s rain dance in her show and taking offence.

Rohit tells Rani he’s not convinced with her acting, and orders her to get out of his house. Sonakshi comes to meet Rani, and tries to inquire if she has ever met Rohit in the past. Rani declines to comment on her relationship with Rohit.

Rohan lies to Tanya, but she finds out he’s going to meet his girlfriend because of the tracker she put in his car. Sonakshi goes to the set, and attempts to find Rani’s history from a union member, but doesn’t get much information.

Suman meets Sonakshi on set, and tells her about Veena’s call expressing reservations about her rain dance in the show. Sonakshi goes home and assures Veena to not take stress about her profession. Veena doesn’t have a problem with her work, but she knows Naren won’t approve of the scene. Sonakshi explains to Veena that Naren won’t be able to watch the episode because she has cancelled the family get together. At the end of the episode, Rohit helps zip Sonakshi’s dress but doesn’t talk to her.