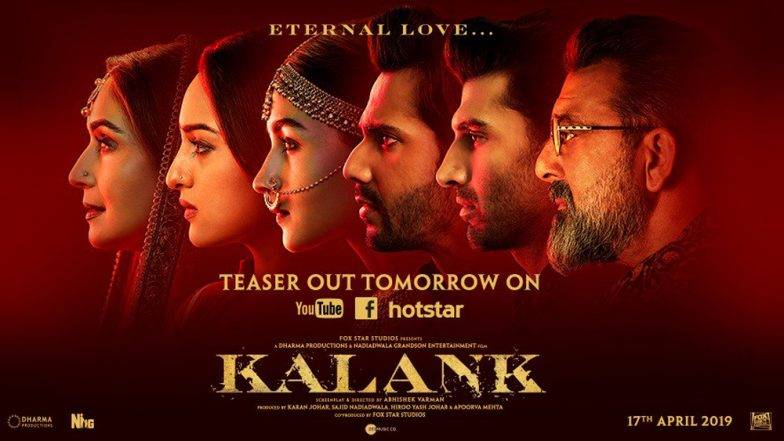 Makers of the upcoming film ‘Kalank‘ unveiled the couple posters of the movie and also announced that the title track of the film will be released tomorrow. The teaser of the film released about a week ago left the fans wanting for more.

Out of the two posters unveiled today, one features Varun Dhawan and Alia Bhatt lost in each other’s eyes and the second one shows Sonakshi Sinha and Aditya Roy Kapur just lost in themselves. A lot can be figured out through these posters but it’s better to keep our imaginations at rest and wait for the movie to unravel the mystery.

A source close to the development said, “The idea is to capitalize on Mahavir Jayanti as well as Good Friday, besides Saturday and Sunday. It’s an extended weekend with two partial holidays. And going by past records, it’s a good time for a big film to release.”

The upcoming period drama is directed by Abhishek Varman and produced by Karan Johar, Sajid Nadiadwala, and Fox Star Studios. The film stars Madhuri Dixit, Sonakshi Sinha, Alia Bhatt, Varun Dhawan, Kunal Khemu, Aditya Roy Kapur and Sanjay Dutt in lead roles. Music has been given by Pritam while Dharma Productions and Nadiadwala Grandson Entertainments are the distributing companies of the film. The period drama film is set against the partition and Indian independence struggle in the 1940s.