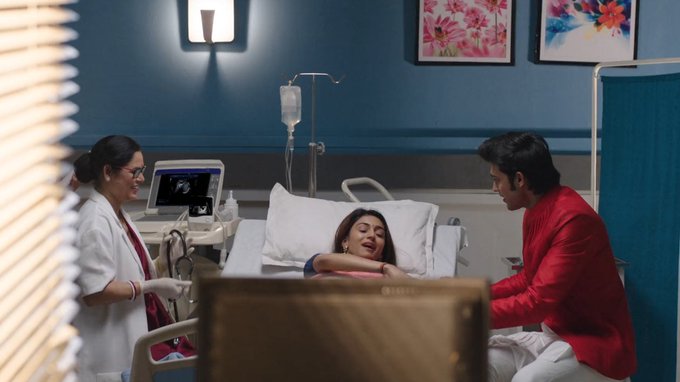 The episode begins as Anurag is agitated and wants to know the name of the electrician because of whose mistake the wires were lying in the kitchen. Anupam goes up and finds the electrician and brings him down before everyone. Anurag begins to berate the man, and when he violently shakes, a couple of thousand rupees notes fall out from his shirt. The man assures them that the money belongs to him. Komolika, afraid that she might get caught, acts like she’s experiencing a lot of pain. Mohini and Nevidita tell Anurag to take her upstairs in their room. But while they’re tending to Komolika, Anupam comes to tell Anurag that Prerna is also feeling pain.

Anurag immediately leave to look after Prerna. Komolika is satisfied that she did enough damage to Prerna’s child. Mohini is upset that Anurag isn’t taking care of his own wife. Nevidita goes to Anupam and tells him that he shouldn’t have come to Anurag with the news about Prerna. Anupam points out that Prerna is carrying Anurag’s baby. Nevidita doesn’t believe him, and even Komolika tries to instigate that the baby belongs to someone else.

At the hospital, Prerna is afraid that the doctors will identity Anurag and tell him something that’d remind him of his past. Anurag is very delighted to hear the heartbeat of the child. Prerna later tells the doctor that Anurag lost his memory and doesn’t remember anything about his past life. The doctor tells her Anurag’s father instincts are still sharp and internally he loves her. Anurag overhears from some nurses that Prerna’s husband left her and is disturbed by the news.

‘A Suitable Boy’: Tabu shares the first look of herself and Ishaan Khatter
Martin Scorsese urges people to not watch ‘The Irishman’ on a phone
Comment