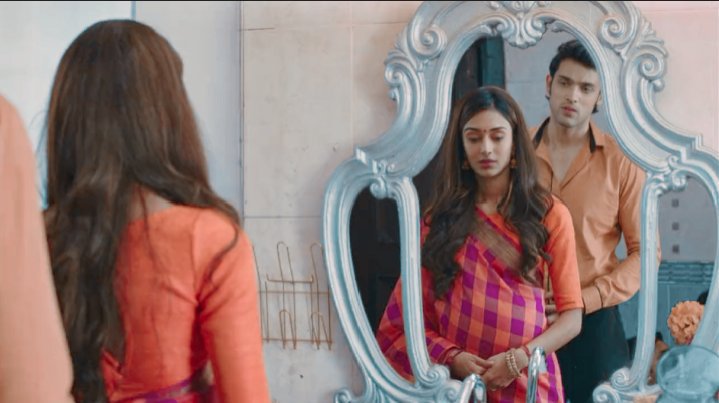 The episode begins with Mohini urging Anurag to go to Honeymoon with Sonalika/Komolika. Anurag isn’t interested in travelling abroad because if the work in his office. Mohini is very desperate to see Anurag and Komolika to get close to each other and decided to have their nupital night.

Anurag us hesitant by the idea, but agrees because of his mother’s repeated pleadings. Prerna comes to the Basu house for work. She’s stopped by Mohini and Komolika. Mohini orders her to prepare Anurag and Komolika’s bedroom for their nuptial night. Prerna declines, stating that she’s not a servant of the house.

Mohini angrily tells her to obey the orders or she’ll suffer consequences. Prerna relents. She goes to the bathroom, attached to Anurag and Komolika’s room and hides her face when she sees Anurag washing his hands in the sink.

Anurag tells her to not worry. He notices Prerna’s baby bump and enquires about her husband. Prerna is overwhelmed with emotions and unable to lie, so she says her husband can’t in contact with her but she still loves him. Anurag asks why he feels such affinity and urge to care for Prerna. Prerna cuts her finger and he applies first aid to her. He experiences brief flashbacks about a memory in the past but can’t recount properly.

Prerna continues decorating the room. Anurag sees her standing up on a stool and tells her to not be careless because of her unborn child. Suddenly, Prerna’s balance tips and they both fall on the bad, with rose petals surprising them. Kokolika sees then together and gets angry again.

Tomorrow: Komolika tries to be intimate with Anurag.