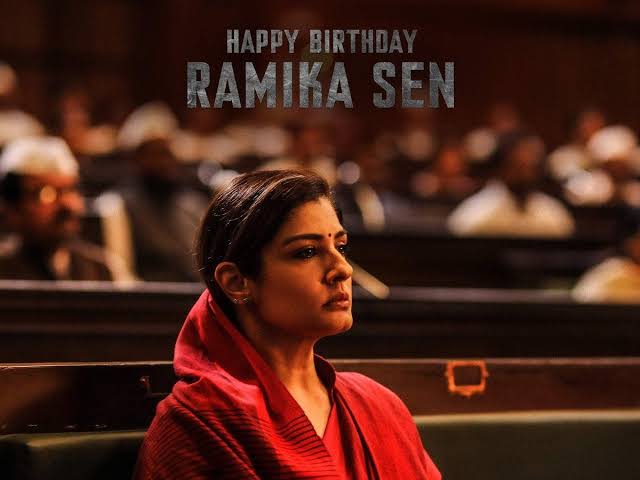 The makers of KGF: Chapter 2 have a mission; to create a film better than the original. To make this mission possible they added new stars to the sequel, with notable among them being, Raveena Tandon. Today is the actress’s 46th birthday and the makers revealed her character’s look from the film. She plays Ramika Sen in the film.

Taking to Twitter the makers shared her look. They posted –

KGF: Chapter 2 has also seen the addition of Superstar, Sanjay Dutt, and National-Award winning actor, Prakash Raj. The makers wanting to widen their reach amongst the Indian Audience, are doing their all to make a fantastic film.

Director, Prasanth Neel is helming the sequel too, after creating the original blockbuster, which came out in 2018.

The film stars Kannada actor, Yash in the lead role, who plays the role of Rocky. In the original film, Rocky loses his mother at a very early age due to poverty and sickness. He grows up hungry to attain power and wealth, with his hunger landing him in the gold mines of Kolar where he ensues a turf war.

KGF: Chapter 2’s production is currently in the last stage and the makers are waiting for the actor, Sanjay Dutt to join them for shooting the climax of the film. It is expected that the film will come out next summer.

Earlier on Sanjay Dutt’s birthday, the makers have revealed his character, Adheera’s look from the film. They followed a similar trend with Raveena Tandon’s character now.

Anticipation for the film is going to skyrocket now and we cannot wait to see the film. Tell us what do you think about Raveena’s look from the film, below.