After English Vinglish (2012), Sridevi didn’t do any lead role. Now, she’s back with a new film, ‘Mom’. CE learns that this is her 300th film. Tweeting the first look, she wrote, When a woman is challenged.

When a woman is challenged… Here’s presenting the first look of MOM. #MOMFirstLook pic.twitter.com/taaJBeDH1d

Here’s presenting the first look of Mom.The film is Directed by Ravi Udyawar and produced by Boney Kapoor, the film will see the actor play the titular role. The poster shows Sridevi in a black dress.

Director Ravi Udyawar has also convinced her to sing. There is a song about mothers which will be used in the background. She might sing that but nothing is final yet, he says. The film had inadvertently landed in trouble for featuring two Pakistani artistes. In the aftermath of the Uri attacks last September, Pakistani artistes were banned from working in Indian projects. Two of his central characters Sridevi’s daughter and husband are played by Sajal Ali and Adnan Siddiqui, actors from across the border. Almost 90 per cent of the film was completed when the attacks happened. For the remaining portions, we had to recreate Delhi in Bangkok. All I can say on this subject is that I respect the new laws that have been made in this context.

This reminded us of her earlier film, Judaai (1997). Besides the title, the word ‘Mom’ is written in several languages and forms. It’s evident that it’s about motherhood and emotions. The film, which is scheduled to release in July this year, also features Akshaye Khanna, Abhimanyu Singh and Pitobash Tripathi. Nawazuddin Siddiqui will be seen in a cameo. Grapevine has it that the story revolves around a woman’s relationship with her step-daughter. In Tamil, Sridevi’s last outing was the Vijay starrer Puli (2015). Predominantly an English film, it might be dubbed in Tamil, Telugu and Hindi. AR Rahman is likely to work on the music.

‘MOM’ motion poster had a monologue of Nawazuddin Siddiqui telling us how a mother’s love is selfless and doesn’t change with time. If that had left you intrigued, then you must watch the film’s teaser, which we can bet will leave your curiosity soaring, seeking answers to so many questions. Ever since MOM’s teaser has released, it has received over 1.2 million views and 10,499 likes on YouTube in 24 hours. The video has received over 900 comments, most of which apparently come from the Pakistani audience. If you are wondering why, then we must tell you that the girl who plays the daughter of Sridevi is a famous Pakistani actor named Sajal Ali. In fact, Pakistan’s famous actor Adnan Siddiqui is also seen in a pivotal role in MOM. 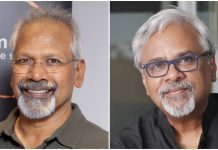