Gangs of Wasseypur fame actor, Nawazuddin Siddiqui was seen filming a scene from his upcoming film, ‘Raat Akeli Hai’ on the roads of Thakurganj in Lucknow. The streets of Thakurganj observed a huge crowd on the roads to see their favourite actor perform live. Nawazuddin is busy shooting for Honey Trehan’s upcoming film, where he was seen as a cop riding a motorbike and investigating the mystery of a case at local video parlour shop. 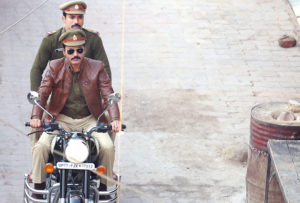 Nawaz also clicked some pictures with the real cops who were taking care of his security during his shoot. 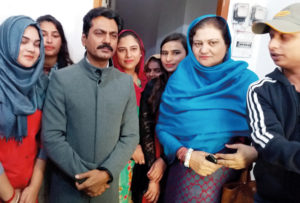 People shouted Nawaz’s name as he stepped out of his vanity and wanted to click pictures with their favourite. Later during a break, the ‘Manto’ actor got himself clicked with his excited fans including the local cops who were looking after his security. 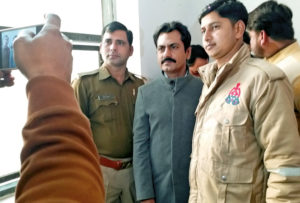 Yogesh Tripathi, Line Producer on telling more about the shooting said, “We were really scared as to how would people react to the shooting early morning and that too in the open, but thankfully everything went smoothly. Bade actor ke saath dikkat toh aati hai but then by God’s grace kuchh bhi aisa nahi hua.”