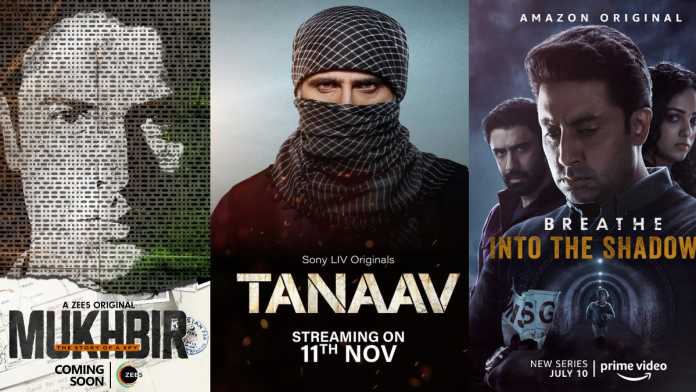 Searching for movies and shows to binge-watch this week? Here is a guide to the top films and web series releasing on OTT platforms this week. From Abhishek Bachchan starrer Breathe: Into The Shadows to Netflix’s latest drama Monica, O My Darling, we provide you with what is available for your entertainment this week.

J is back for his unfinished business. He re-emerges to finish what he started. Meanwhile, Avinash encounters his dual identity and is forced by J to complete what he began. However, Victor, a new partner in crime befriends J to complete his sphere. Will Inspector Kabir be able to catch J again?

Netflix’s latest romantic drama features Lindsay Lohan and Chord Overstreet in the lead roles. The story follows a privileged hotel heiress who meets with a skiing accident and loses her memory. However, she wakes up in the care of a blue-collar lodge owner and his little daughter a few days before Christmas.

Set in the picturesque valley of Kashmir, the action-packed suspense drama focuses on the covert activities that have a huge impact on psychological, spiritual, emotional, and ideological costs incurred by the conflicts that the show depicts. Taanav is set to have a digital release on November 11 exclusively on SonyLIV.

4. Mukhbir: The Story of A Spy

As the Indian spy enters Lahore to attain some crucial information, he bonds with the Pakistani officials and ends the war against India. The spy drama features Zain Khan Durrani, Prakash Raj, Adil Hussain, Barkha Bisht and Harsh Chhaya in significant roles.

Helmed by Vasant Bala, the dark comedy features Rajkummar Rao, Radhika Apte and Huma Qureshi in the lead roles. “A slick robotics expert joins a murderous plot after a passionate affair takes a sudden turn, but nothing — not even death — is what it seems to be,” reads the logline of the Netflix film.

Enjoy the week watching some of the latest content on the OTT world. Happy binge-watching!