Universal has officially released the trailer of News of the World, directed by Paul Greengrass and starring Tom Hanks.The movie is an adaption of the namesake book by Paulette Jiles.

Five Years ahead of the Civil War the plot of the film revolves around Captain Jefferson, Kyle Kidd (Tom Hanks) veteran of three wars and a storyteller who moves from town to town.

On his way, he meets a 10-year old girl in Wichita Falls, Texas who is kidnapped and raised by the Kiowa People like their own. 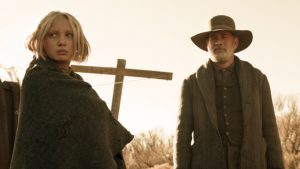 The duo embark on a journey together as Kidd agrees to deliver the child to her uncle and aunt.

Traveling miles together, they survive the grave dangers on their way in search of finding a shelter.

The film’s music is written by James Newton Howard. Helena Senegal plays the role of the 10-year old child, while the screenplay and direction are by Paul Greengrass.

The film will hit the theatres on December 2020.

While the heartfelt story is painfully simple, the captivating performance by Tom Hanks in the new trailer makes it a must-watch for all the eagerly waiting Tom Hanks Fans.