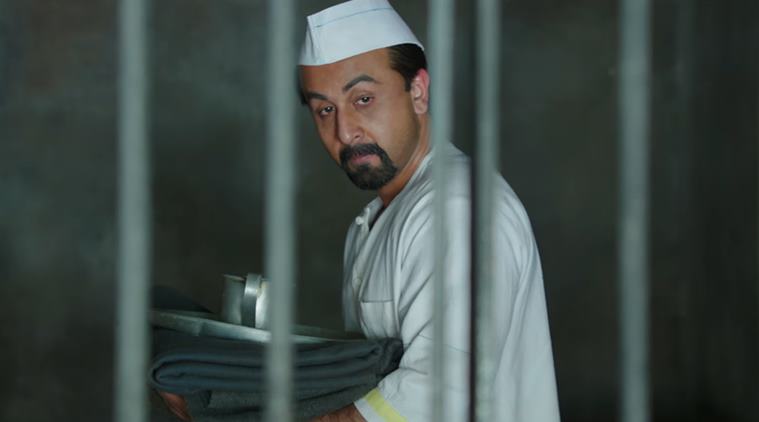 After much debate and excitement, the 180-second trailer for upcoming film Sanju was finally uploaded on Fox Star Hindi’s official YouTube channel on the 30th of May. The trailer instantly racked up millions of views, and dedicated fans and artists throughout India began expressing their opinions and starting their assumptions on social media websites like Twitter.

Even beyond Rajkumar Hirani, who had previously directed famous movies like 3 Idiots, and PK, receiving his expected amount of praises, was Ranbir Kapoor, who has already received much critical acclaim for his impassioned portrayal of the character of Sanjay Dutt. The fact that the movie will not gloss over the rather dark moments of his life, but do justice to the truth behind Sanjay Dutt’s addictions and imprisonment was pretty much evident from the trailer. Many fans and fellow actors had also praised Ranbir Kapoor upon changing his body style, attitude, and ticks, to mimic that of Sanjay Dutt himself.

The trailer even racked up the attention of many movie critics like Taran Adarsh, and Bollywood big stars, like Karan Johar, who immediately took to their Twitter accounts to make public their feelings about the trending trailer. In his tweet, Karan Johar expressed his love and excitement towards watching the trailer and tagged Rajkumar Hirani, calling him a genius. He also congratulated his friend Ranbir Kapoor by calling him a ‘bonafide rockstar’ in the very same tweet. 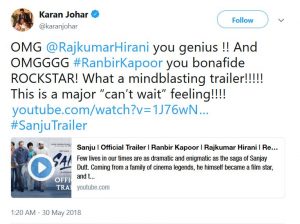 With the release of this trailer, and remembering the hit teaser released a month ago, fans have prepared themselves for receiving the next glimpse of Ranbir Kapoor as Sanjay Dutt on the silver screen on the 29th of June, 2018.