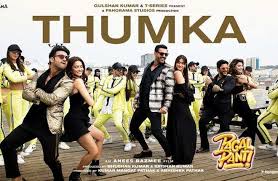 After releasing Tum Par Hum Hai Atke last week and making us all nostalgic, the makers of the upcoming film Pagalpanti have released the second song of the movie. While the last song was a recreated version of the 90s hit Tum Par Hum Hai Atke that brought back the old memories, this new song is a peppy number that will force you to move along with the track.

Titled Thumka, the video song features the entire main cast of the film. The song has been written, sung, and composed by YO YO Honey Singh while the additional lyrics have been provided by Singhsta, Hommie DilliWala. Ganesh Acharya has choreographed the song.

Actor John Abraham took to his social media account to share the song with his fans. He wrote along with the post, “Ab toh dance floor par lagenge sirf thumke 💃🏻🕺🏻 #Thumka song out now !!”

John Abraham and Ileana D’Cruz starrer Pagalpanti had already created a lot of buzz across the social media with its quirky posters and with the witty introduction of its characters.

Check out the song Tum Par Hum Hai Atke below: