The trailer of Ashutosh Gowariker’s upcoming film Panipat was recently launched. While the trailer has received mixed response from the audience due to its similarities with Bajirao Mastani and Padmaavat, it has certainly raised concerns in Afghanistan.

The concern is about the portrayal of Afghan King Ahmad Shah Abdali who is considered as the founder of present day Afghanistan. It is feared that the King might be portrayed as an extremely cruel uni-dimensional character. This has happened in the past as well. Many historians found the depiction of Khilji in Sanjay Leela Bhansali’s Padmaavat far from history.

Today, India and Afghanistan very close and cordial relations. The Afghan officials are concerned that the portrayal of Abdali in an insensitive manner might have an effect on the Indo-Afghan ties.

Former Afghanistan ambassador to India Dr Shaida Abdali took to Twitter to express his worries about the film. Showing concern over Ahmad Shah Abdali’s portrayal in the film, he wrote in response to a post of Sanjay Dutt who is playing the character of Abdali. Dr Shaida wrote, “Dear @duttsanjay Ji: Historically, the Indian cinema has been extremely instrumental in strengthening the Indo-Afghan ties – I very much hope that the film “Panipat” has kept that fact in mind while dealing with this important episode of our shared history!”

Dear @duttsanjay Ji: Historically, the Indian cinema has been extremely instrumental in strengthening the Indo-Afghan ties – I very much hope that the film “Panipat” has kept that fact in mind while dealing with this important episode of our shared history! https://t.co/8HKLei2ce1

Current Afghan Ambassador to India Tahir Qadiri talked about the same to Afghanistan news agency Pajhwok Afghan News, and said, “We are in contact with Indian officials and have shared Afghans’ concern with them.”

Ajmal Alamzai, cultural attaché at the Afghan embassy in New Delhi said that they got to know about the film two years ago. “We have emailed the film director to share the scenario with us but he didn’t. We have tried several times to contact the director, but failed,” he said.

Panipat is based on is based on the Third Battle of Panipat that took place on 14 January 1761 at Panipat between a northern expeditionary force of the Maratha Empire and invading forces of the King of Afghanistan, Ahmad Shah Abdali.

The Maratha warriors were defeated in the battle which is considered as one of the largest and most eventful fought battles in the 18th century. Abdali was supported by two Indian allies— the Rohilla Afghans of the Doab, and Shuja-ud-Daula, the Nawab of Awadh.

The film is slated to release on 6 December. 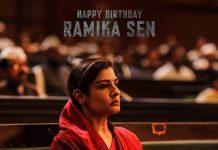