John Abraham and Diana Penty’s historical action-drama film Parmanu: The Story of Pokhran which hit the theatres on the 25th of May has already crossed the Rs 50 crore mark within mere 13 days of its release. This news was first acknowledged by John Abraham’s own banner John Abraham Entertainment, who decided to upload a tweet on their official twitter account congratulating the cast and crew of Parmanu for being part of such an achievement. John himself retweeted the post later with an added caption of his own words where he marvelled over all the hurdles Parmanu had gone through before coming to this position. The same tweet was also quoted by Diana Penty who decided to express her gratitude by thanking everyone who had been a part of Parmanu, and all of her viewers who were the main reason this achievement was unlocked by the movie. 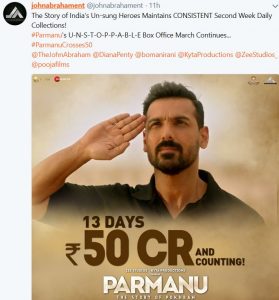 Parmanu: The Story of Pokhran revolves around the Indian Army situated at Pokhran in 1998 who were responsible for all the nuclear experiments and bomb test explosions initiated by the India which actually paved the way to the country becoming the sixth leading nuclear power nation in the world. The success of Parmanu had indeed been a very doubtful one owing to the massive clash between the co-producing entertainments with constant shifting of the release dates. Nevertheless, under two weeks, Parmanu has shown an exemplary performance at the box office, earning a total gross of Rs 50.55 crore.