Actress Ananya Panday is gearing up for the release of her upcoming romantic comedy film ‘Pati Patni Aur Woh.’

She recently shared some of her pictures on her Instagram profile, showing her love for black colour to her fans.

Dressed in a lovely black outfit, the daughter of Chunky Panday looks like a sight to behold in these pictures as she poses gracefully.

She captioned it: “I’ll stop wearing black when they invent a darker colour”

I’ll stop wearing black when they invent a darker colour ???? Ananya had also shared her picture with American singer Katy Perry who visited Mumbai for an event.

On the work front, Ananya will be seen in the upcoming romantic comedy film ‘Pati Patni Aur Woh’ directed by Mudassar Aziz.

The film stars Kartik Aaryan, Bhumi Pednekar and Ananya Panday in the lead roles and is a remake of the 1978 film of the same name by B.R. Chopra that starred Sanjeev Kumar, Vidya Sinha and Ranjeeta.

Produced by Bhushan Kumar, Renu Ravi Chopra, Juno Chopra and Krishan Kumar, the film is scheduled to release on 6 December.

The makers recently released a song titled “Dheeme Dheeme” which has become popular with over 20 million views on YouTube.

The film created controversy after one of the dialogues about marital rape from the trailer did not go well with the viewers. That bit was later removed from the trailer.

Ananya made her Bollywood debut this year with Punit Malhotra’s teen drama ‘Student of the Year 2’, which met with mixed reviews but proved to be a financial success. 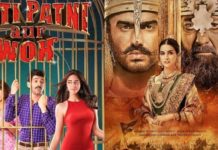