Women! Lately, everything has been about women or around women. From women empowerment to #MeToo movement, a whole new wave has started in the country. There may be different reasons for it, but one that can be understood is that for the most part of their lives, women have been kept hidden and away from the mainstream. Also, thanks to the digital era that we have stepped into. The gates for knowledge and awareness have opened up more, which means; more and more people are sensitizing towards women-related issues and are widening their mindsets.

The entertainment industry and particularly the Indian entertainment industry has been male-dominated from a fairly long period. But there has been a recent shift in the preferences of the viewers. Female on-screen presence is not only enjoyed but appreciated as well. YouTube is one such industry that has also seen the rise of male creators but less female creators, especially in the Indian context. It is expected a woman to do exceptionally well if she has to leave an imprint in the minds of the viewers. The responsibility of a female creator is thus doubled and the same is expected from her in every field. One such name that has gained fame and has accolades to her name, along with the all the love that she has gathered from her viewers is Prajakta Koli, also known as MostlySane.

Prajakta Koli, an Indian YouTuber. Born and brought up in Mumbai, Prajakta started with her YouTube journey in 2015. Preparing to become a Radio Jockey right from the beginning, Prajakta made every effort in that direction. But life had something else in store for her. While she was interning at Fever 104 FM, she realized soon after that this isn’t working well for her.  A lame video consisting of her meeting with Hrithik Roshan, and she was proposed with the idea of starting her YouTube channel by Sudeep from One Digital Entertainment. Aspiring to have just 30k subscribers, Prajakta started her channel in February 2015. She did not become famous overnight. Her video “10 Hilarious words that Delhi people use” is what caught everyone’s attention. From 2000 subscribers, within months, she hit a whopping 25k subscriber’s mark.

MostlySane currently has 4M subscribers in just 4 years, and 570 videos on her YouTube channel. Prajakta also has over 350 fan pages dedicated to her online. What makes her unique is that she does 3 videos a week, #RealTalkTuesday,#SawaalSaturday and a regular video on Thursday, which is usually longer and is inspired by experiences and observations from daily life.

To break the monotony, Prajakta also introduced various sketches on her channel, that she enacts herself. Prajakta claimed in an interview that her parents are almost similar to the sketches of Mumma Koli and Baba Koli. The sketch of Sonya came into reality, keeping in mind the character of ‘Poo’ from Kabhie Khushi Kabhie Gham movie, whereas, her most loved sketch of her brother ‘Montu’ has gained inspiration from experiences shared by her friends. 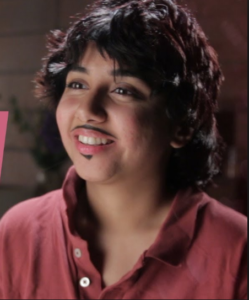 Apart from entertaining her viewers at YouTube Fan Fests and meet and greet, she has also participated in social causes, with the intention to bring change. Her music video “Shameless” garnered massive response and features various renowned names. “No Offence”, another music video by Prajakta, was made for the campaign ‘creators for change’. Not only was it loved and appreciated, but the video was also screened at the UN, where Prajakta was invited as well. Along with the work, Prajakta has many accolades to her claim as well. In 2019, Forbes India announced her as one of India’s biggest talents for their 30 under 30 issue of February. She has recently been awarded by Exhibit Magazine under the category of top 100 digital influencers and has been the cover girl of Exhibit Magazine for the month of July. But, in an interview with Femina, Prajakta stated her personal victory was when a 13-year-old girl came at a meet and greet in Delhi and shared her experience of wearing a skirt without shaving her legs and taking public transport. That is the kind of impact a music video has.

Prajakta has collaborated with many YouTubers like Lilly Singh, FilterCopy, Bhuvan Bam, etc. Apart from this, she has also collaborated with Ayushmann Khurrana, interviewed Hrithik Roshan and many other Bollywood celebs.

Spent some time talking to @ayushmannk about castes, religion, sexes and so much more! Video YouTube pe live hai! #Article15

Prajakta from the year 2000 is doing backflips right now! So excited for this @iHrithik 🤗 https://t.co/O476nXXMyB

These digital content creators are trying everything they can to debunk the stereotypes associated with a particular gender. Prajakta’s “No Offence” music video attacks various institutes all at once, including xenophobia, sexism, and homosexuality.

Prajakta has given various interviews over the years and has been a TEDx Speaker as well. She has also made an appearance on Kareena Kapoor Khan’s show ‘What Women Want’. She spoke about whether there is performance pressure is different on male and female content creators in the YouTube industry. She further goes one step forward and debunks the notions related to gender. Prajakta believes that a lot of gender filters are used by women, even before men ask them to use them. She wants the women to shed those gender filters and stop imposing restrictions on themselves.

Prajakta finds herself to be lucky because of the kind of people she is been surrounded with. She claims that she has never been raised differently or was held back from any conversation, just because she was a girl. Even her team behaves the same with her, which motivates her to pull off all the sketches on screen by herself. Her success isn’t credited to anybody else but to her own self.

How many thanks to give. How many smiles to live. #ThankYou #4Million

She is a perfect blend of humility and success. It is great to see how people around the globe are acknowledging her work and finally are not crediting this success to someone else. Using the best tool at their disposal, these content creators are trying to bring a change, even though small it is, their efforts make it clear that they are trying everything they can. Not only do they entertain their audience and be as one with them in YouTube Fan Fests and other meetups but denounce the negative behavior and gender stereotyping through their work. Also, Prajakta is one of those creators who aren’t scared to admit to the fact that there will be someone better someday and that their videos might not gather the same response as it does now. But, this doesn’t stop her from delivering her best.

It is important to step up and encourage more women who can be self-sufficient and at least realize this fact that they are complete in themselves and don’t need any validation from anyone. It also is time to shed those gender roles and filters that have been embedded deep into our minds through the system that is absurd and might erupt at any time.