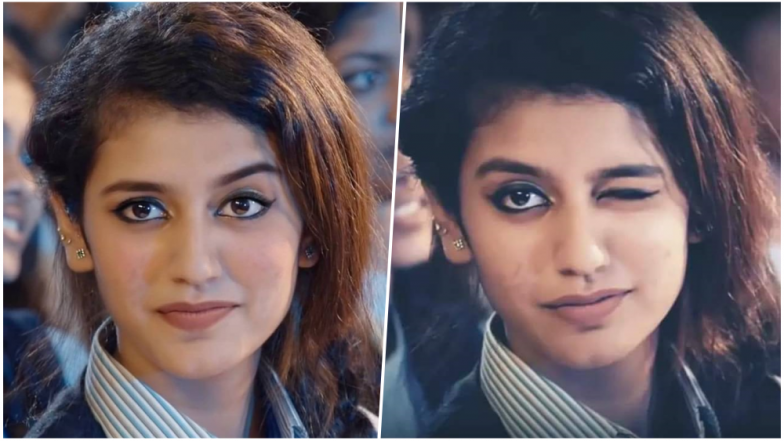 February 9th must have been a historic day for Priya Prakash Varrier when the release of a song from her movie made her an overnight star. The 18 years old actress has taken the internet by storm with her notorious expressions that have become the talk of the town. After this sudden popularity Priya has come forward thanking the viewers for the immense love.

Priya who had a humble number of followers beforehand has had a whooping increase in the past two days with her Instagram followers crossing 2 million in this span of time. Priya took to twitter to thank her fans. She shared the part of the video comprising the popular wink sequence that rendered her all the fame. She captioned it, “Thank you so much for the love and support for #ManikyaMalarayaPoovi#OruAdaarLove. 4.3 Million views for YouTube & counting, 600k+ for me going bigger in Instagram. #MondayMotivation #PriyaPrakashVarrier”.

Thank you so much for the love and support for #ManikyaMalarayaPoovi#OruAdaarLove. 4.3 Million views for YouTube & counting, 600k+ for me going bigger in Instagram. ???? ???? #MondayMotivation #PriyaPrakashVarrier pic.twitter.com/vKLLQKiho2

The song being referred to is titled ‘Manikya Malaraya Poovi’ from her upcoming Malayalam film Oru Adaar Love. After the song hit the internet, Priya has been getting messages from all her fans, particularly men, asking her out for Valentine’s Day.

Priya’s expressions in the song have become the focal point of the entire buzz. Priya however credits her performance to her director. She says, “The director wanted me to play with my eyebrows in a certain way. It’s a mappila song (rhythmic songs in the north Kerala tradition) that has been recreated for the film. And there’s a scene where this girl and this boy converse through expressions — and the director wanted a certain mannerism. I just followed his instruction”.

It will come as a relief to all her male fans that the young actress is very much single, though fully inclined towards her studies and career. When asked about the same, Priya declared, “There’s no one special in my life. My studies and my dream of becoming an actor are the two focal points of my life. On Valentine’s Day, I’ll have to go to college because attendance is a problem. I’m not thinking much [about getting mobbed] — after all, I go to a girl’s college”.

If you haven’t seen her song yet, you’re probably living under a rock. Have a look-