Priyanka Chopra made mixed rounds on social media over her uncanny outfit at Joe Jonas’s birthday bash on August 16.

Priyanka and husband Nick were among the close attendees at Joe Jonas’s Bond-themed birthday party. Priyanka has been the centre of attention for critiques ever since her wedding to the singer, ranging from her unusual choices in apparel to her post-vacation weight gain, which also lead to speculations of pregnancy. Nick Jonas has been long time frontman of the famous ‘Jonas Brothers’, and a successful solo artist as well. Nick met Priyanka during the 2017 Met Gala, the two posed together for various photos throughout the evening, giving way to prompt speculations of being a couple.

The two made their relationship official in June 2018, and subsequently got married on 1st December.

She was bashed and severely trolled by her fans and followers for smoking in a picture she posted, ahead of her 37th birthday. She was called out for hypocrisy, relating to an older tweet where she stated that she was an asthmatic and various other instances where she took to social media to speak against the habit of smoking and claiming that she ‘hated it’. 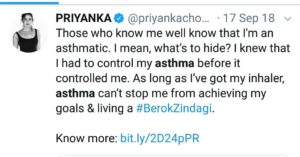 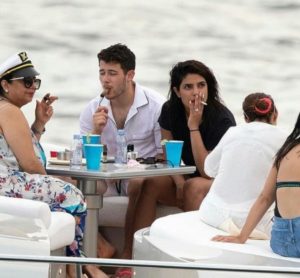