PVR Pictures, one of the top film production and distribution companies in India, finally confirmed their success in acquiring the rights to distribute the upcoming American supernatural horror film Hereditary from A24, and made public their decision to release the movie in India soon. The news was broken to the fans on Twitter by movie critic Taran Adarsh, who uploaded a picture of the movie’s poster with a caption stating that PVR Pictures intended to release the movie in India on the 22nd of June, 2018. 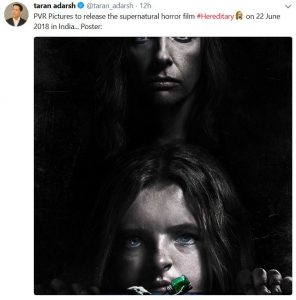 Hereditary had already made its reputation as the scariest film of 2018 when it was first premiered at the 2018 Sundance Film Festival on the 21st of January. The movie, starring Toni College and Gabriel Bryne, was directed by Ari Aster, and pursues the life of a family haunted by the death of their introvert grandmother. Hereditary is scheduled for release in the United States of America on the 8th of June, while the United Kingdom is prepared to receive the horror film on the 15th.

The first repute of the gravity of the movie’s horror scenes had been brought when its trailer, released on the 30th of January, was shown prior to the screening of Peter Rabbit to a predominantly young audience in an Australian theater. Reports of over a hundred children who had begun crying and had to exit the cinema hall flew in after the untimely screening of the horrifying teaser. Movie critics have praised the movie as to being the most traumatically terrifying horror movie ever, comparing some of its scenes to that of Rosemary’s Baby, and The Wicker Man. As of yet, Hereditary holds a 100% rating on Rotten Tomatoes – the top American review aggregator website for movies.