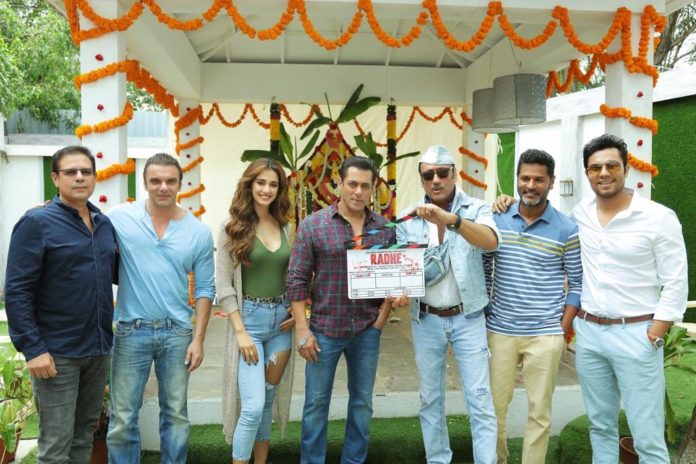 The highly awaited film of Salman Khan Radhe: Your Most Wanted Bhai has finally gone on the floors. The shooting of the film has begun today in Mumbai and the Mahurat shot will be filmed in Lonavala.

Salman Khan took to his social media account to share the news along with a picture of the team with his fans. In the photograph we can see we can see (from right to left) Randeep Hooda, Prabhudheva, Jackie Shroff, Salman Khan, Disha Patani, Sohail Khan and Atul Agnihotri while Jackie is holding the clap with the film’s name written on it. Salman captioned the post as “And the journey begins . . . #RadheEid2020”

Several reports were doing the rounds around the cast of the film. Disha Patani was reported to be the leading lady in the film and that has been confirmed today.

Earlier today, rumours were also rife about Randeep Hooda being part of the film. Randeep is now confirmed to be a part of the film and that too a pivotal one as the actor will be playing the antagonist in the film. A source told Mid-Day, “Randeep plays an antagonist in the film. He liked the role and hence agreed to do it. This is the first time he is playing such a character. Also, Salman and Randeep have worked together in the past and they share a great relationship.”

The Mumbai schedule of Radhe will go on for a month after which Salman will get busy in the promotions of Dabangg 3 which is releasing in December this year. After completing this schedule, Salman will also go abroad in order to shoot some songs.