We have watched a variety of revenge stories in Bollywood. Post 70s, the “protagonist seeking revenge” has been the favourite and a general plot theme in Bollywood which continued almost till the mid 2000s and yet there are many stories which are based on a similar storyline. However, if we take a look at Sriram Raghavan’s world of revenge stories, it somewhere hits at a point where the protagonist realizes the actual destruction his decisions had led to be it for others or even for himself/herself. It has always raised a question, How far have I gone? We have seen it in two of his revenge stories including Ek Hasina Thi and Badlapur. .

Revenge is a dish best served cold, the most overrated phrase we have heard over the years, but honestly the reality is different. In this scene from Badlapur where Raghav confronts Liak and tells him that he has killed Harman and his wife brutally. At this point, Liak confesses to Raghav about killing his wife as he feels that they both are now on a similar line. Where Raghav actually realizes his doings, but just partially as further he seeks revenge from Liak. This is just a perfect variation of characters by Sriram Raghavan. Though when I first watched Badlapur, I was not that mesmerized by it but as we say everything just needs a right time. Badlapur and Ek Hasina Thi is actually not about revenge but is more in-depth of life.

Share your views on the film Badlapur and stay tuned to The Indian Wire for more such articles. 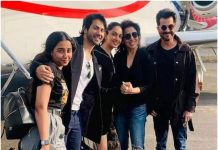