Most of us have grown up admiring the mainstream Hindi Cinema. And that’s how we have been conditioned when it comes to reality, we expect our lives to be like films, “A Happy Ending”. That’s another side of the story but what goes behind the walls of this industry is what all of us are eager to know which is the reason why Entertainment Journalism is on boom in India. Surprisingly, Zoya Akhtar’s ‘Luck By Chance’ filled with big name cameos attempts to provide viewers an in-depth insight from the working of the Hindi Film Industry. Story intersecting two sides of wannabe actors, Sona (Konkana Sensharma) and Vikram (Farhan Akhtar), as we follow up their journey, survival in this glamorous world, with a tons of necessary contacts. But what gets through and what’s left at the end. All this creates a mixture of scenes where you’re aware that the line between fiction and reality is being blurred, only you’re never quite sure to what extent, and that’s part of the fun.

There are a lot of cameos in the film but the one which steals your attention and is stored for the end is of Shah Rukh Khan where he tells Vikram never to lose sight of the people who knew him when he was a struggler – “they are the only ones who will always be honest with you”. In a short yet very beautiful scene where Zafar Khan (Hrithik Roshan) sitting inside his car, making faces at kids who are pressed against the window; the pan shot that takes us into the car, removing the children from the frame and leaving us with a Zafar looking at his own reflection.

Let us know your views on the film in the comment box below. Meanwhile stay tuned to The Indian Wire for more such articles. 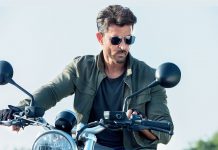