There are only a few fortunate who get a chance to resemble their icons on the screen, and we guess Richa Chadha, who is an ardent admirer of Madhuri Dixit, might just be one of them. Actress is currently working on her next film, which is titled ‘3 Storeys‘ and the first look of it reminds us of Madhuri Dixit’s most popular song “Humko aaj kal hai Intezaar” from the movie ‘Sailaab’.

The movie 3 storeys which is directed by the debutant Arjun Mukherjee and produced by Farhan Akhtar. The makers apparently took a perfect cue for Richa’s look from the 90’s movie. Her character in the film seen donning Marathi Mulgi avatar for the film. Furthermore, her outfit and her accessories seem to be heavily inspired by one of  Madhuri’s avatars during the 90s. 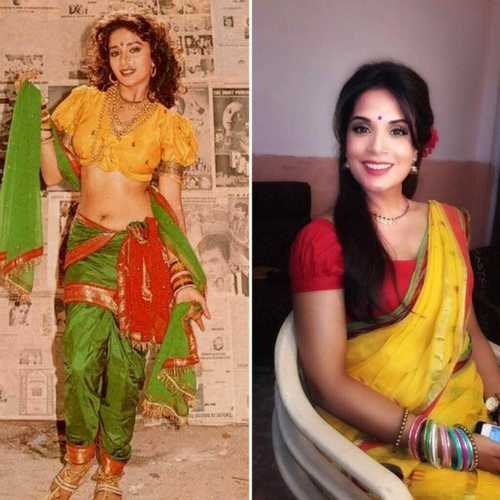 The filmmakers have revealed the first motion poster of ‘3 Storeys’ on Twitter. The film is a bouquet of 3 parallel stories set in a residential colony in Mumbai and has Renuka Shahane, Pulkit Samrat and Sharman Joshi in other roles.

The film ‘3 Storeys‘ is all set to release it on 25 August this year. Have any information related to this article…? Feel free to comment in the given box below..