Just a day before the release of the first look, the makers of ‘Saand Ki Aankh‘ released a pre-introductory teaser from the film. The short video gave a sneak peek of Chandro and Prakashi Tomar’s life and highlighted their achievements.

The film stars Bhumi Pednekar and Taapsee Pannu in the head roles, while Vineet Kumar Singh and Prakash Jha in pivotal roles. Acclaimed scriptwriter Tushar Hiranandani is making his directorial debut with this film.

Taapsee shared the teaser and wrote, “Old is bold and it’s an honour to portray their terrific stories that are untold. #SaandKiAankh. Come join us…”

Taapsee took to Twitter to share another short video from the sets of the film and wrote, “We r ready to show u the glimpse of the most inspiring story u will hear n my most challenging role to play till date! #SaandKiAankh”

We r ready to show u the glimpse of the most inspiring story u will hear n my most challenging role to play till date ! #SaandKiAankh pic.twitter.com/AQE3usJi7C

The producer Anurag Kashyap, has got an international makeup artist for the prosthetics as Taapsee will be seen as a 60-year-old in few parts. The film will be directed by Tushar Hiranandani.

Chandro Tomar, an 87-year-old female Jat shooter is also known as “Shooter Dadi” and is the pride of the district. Mother of eight and grandmother of 15, Tomar has won 25 national championships throughout India.

Now shooting runs in her family. Her granddaughter Shefali Tomar is an international shooter and her niece Seema Tomar is also a sharpshooter. Seema was the first Indian woman to win a medal at the Rifle and Pistol World Cup in 2010. 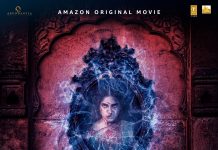