The Covid-19 pandemic has ultimately opened new doors i.e of virtual theatres on OTT platforms for the release of new movies. With nearly eight months of lockdown, the theatres were shifted to OTT platforms releasing many new and big-budget films there including the recent ones, Akshay Kumar’s Laxmi, Anurag Basu’s Ludo, and Rajkummar Rao starrer Chhalaang. It was earlier believed that Salman Khan’s most awaited film Radhe: Your Most Wanted Bhai will also make a way on OTT but the makers have now confirmed that the film will have a theatrical release Eid 2021.

Trade analyst Taran Adarsh confirmed the same and wrote, “#RADHE #OTT RUMOURS BASELESS… There was speculation in the *exhibition sector* that #Radhe – starring #SalmanKhan – will skip theatrical release… Will stream on #OTT directly… FALSE… The producers are clear, #Radhe will release in *cinemas*, eyes #Eid2021 release.”

Radhe was earlier scheduled to release this year in May on the eve of Eid but had to be postponed due to the pandemic.

Last month Salman had shared a picture on his Instagram handle, revealing that he is shooting for the film. Sharing his photo from Radhe sets, Salman Khan wrote, “Back to shoot after 6 1/2 months … feels good #Radhe (sic).” 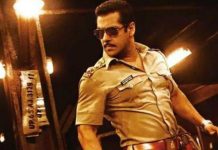 Before Salman Khan, THESE 2 Actors were considered to play Chulbul Pandey in Dabangg