After the massive success of film ‘Kabir Singh’, Shahid Kapoor is next gearing up for sports film Jersey, which is a remake of a Telugu film of the same name. The film is looking very promising but before even the shooting of the film started, people have already started to compare it with another sports drama film, 83.

Both Jersey and 83 revolve around cricket, a game which is massively popular in our country. Both films involve big names; Ranveer Singh and Shahid Kapoor, and that is why comparison between these films is inevitable.

In a media interaction recently, Shahid talked about his thoughts on this clash. In his words, “We are aware that there are two cricket films coming out next year and there may be a third. 83 is a wonderful subject and I wish them all the best. It’s about India triumphing at the 83 world cup, and that is something everyone wants to watch.”

Talking about how his film Jersey is different, Shahid said, “Jersey is a very personal film. It’s about a human journey and it touched me deeply. So that’s why I am guessing both films should have their individual identity and I am looking forward to seeing 83.”

Talking about his association with game of cricket, Shahid said that he has lost touch with the game. He said, “I used to think I was a very god cricketer, because I used to play in school. I forgot the fact that there has been a long gap that I have not played cricket. It’s fun to play cricket as a game but when you are playing a cricketer in a movie, you have to get the techniques right and need to dedicate a lot of time for that. So I am trying my best for that”.

Shahid has already started preparing for his role and the actor was recently spotted honing his cricket skills. Talking about the film, Jersey was first made in Telugu, and the hindi version will also be directed by the same director, Gowtham Tinnanauri.

The telugu version of the film revolves around the protagonist named Arjun (played by Nani) and his struggles to make it big in Indian cricket.

The hindi version of the film is being produced by Allu Aravind, Aman Gill, Dil Raju. The film is scheduled to release on August 28, 2020. 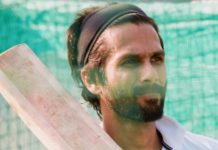