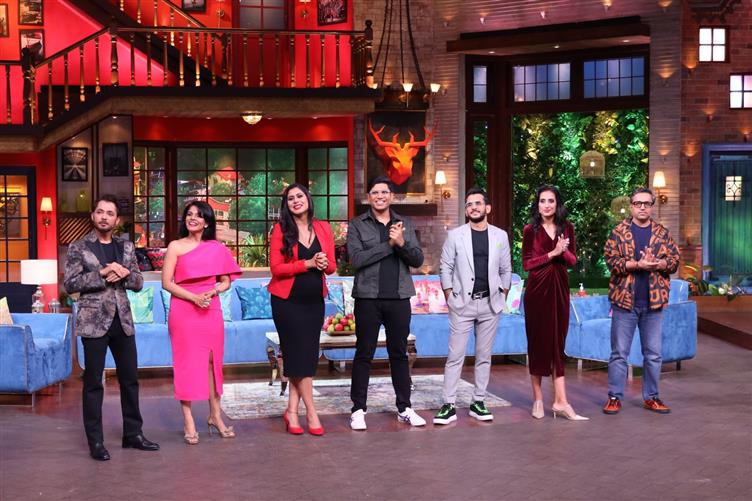 The seven judges of the popular business reality show Shark Tank India graced the set of The Kapil Sharma Show as guests. The ‘sharks’ had a fun gala time at the set with host Kapil Sharma and his team.

Shark Tank India is a franchise of the popular American show Shark Tank. It shows the budding entrepreneurs making business presentations in front of the eminent self-made businessmen of India, popularly known as ‘Sharks’ in the show. The Sharks discuss the ideas themselves and decide to invest in the startups.

Shark Tank India is the first edition of the business reality show created in India. Sony Entertainment Television offers a refreshing experience for business enthusiasts to pitch their innovative ideas to a group of prestigious entrepreneurs of the nation.

Kapil Sharma Lists The Net Worth Of The Sharks

The Kapil Sharma Show invited the renowned entrepreneurs of India to grace the weekend episode. The judges, popularly known as Sharks, were greeted by the host Kapil Sharma on Saturday to have a fun tittle-tattle on the show. Kapil Sharma enlists the net worth of the sharks and humorously says that if they get abducted right now, India’s GDP will significantly fall. The famed sharks and their companies are listed below.

An alumnus of IIT Delhi and IIM Ahmedabad, Ashneer Grover is the MD and Co-founder of BharatPe with a net worth approx Rs 21,375 crore.

Founder and CEO of the leading e-commerce portal for glasses Lenstkart.com, Bansal’s company net worth around Rs Rs 37,500 crore.

Graduated from The Fuqua School of Business, North Carolina, Namita Thapar is the Executive Director at Emcure Pharma with a net worth approx Rs 15,000 crore.

The founder and CEO of People Group Shaadi.com, Anupam Mittal is a graduate of Boston College. His company’s net worth is approx Rs 15,000 crore.

Co-founder and CMO of boAt and an MBA from the Kellogg School of Management, his company net worth is approx Rs 10,500 crore.

Alumni of IIM Ahmedabad, Vineeta is the CEO and co-founder of SUGAR Cosmetics, India’s fastest-growing beauty brand with a net worth of approx Rs 4,000 crore.

Mamaearth Co-Founder and CIO invested in the shortlist in Uvi Health, Ghazal Alagh’s company net worth is approx Rs 7,500 crore.

The overall net worth of the companies altogether marks up to Rs 1,10,875 crore. Isn’t Kapil Sharma’s joke right about the GDP thing?

The Sharks had a fun time at Kapil Sharma’s show as it was their first experience on screen besides their current reality show. The judges went to TKSS for the promotion of their business reality show, Shark Tank India. The show is getting immense responses from the audience and to expand the TRP of the new entrepreneurial show on TV, Sony Entertainment Television decided to host a fun session between TKSS and the Shark Tank India team which ensued as a delightful episode for the viewers.