After releasing the trailer around a week ago, the makers of the upcoming film Shikara have unveiled a new poster today. The latest poster features the film’s leading cast. Adil Khan can be seen wearing a blue shirt and tie in the poster while Sadia, dressed in an orange shalwaar kameez, is sitting beside him. In the background, one can see small tents suggesting the place to be a refugee camp.

The makers took to the official Twitter handle of Vidhu Vinod Chopra Films to share the poster and wrote, “The closest hold you the strongest when the world falls apart. “When hate was all that was left, love was their only weapon.”

The official synopsis describes Shikara as “the story of resilience in the face of insurmountable odds. It’s also the story of a love that remains unextinguished through 30 years of exile. A timeless love story in the worst of times.”

The film  marks the return of Vidhu Vinod Chopra to director’s chair in Bollywood after over a decade. His last Hindi directorial venture Eklavya bombed badly at the box office. In 2015 he directed a Hollywood film Broken Horses featuring Vincent D’Onofrio that also turned out to be a disaster.

Directed and edited by Vidhu Vinod Chopra, Shikara is produced by Chopra in association with Fox Star Studios. It is scheduled to be released on 7 February next year. 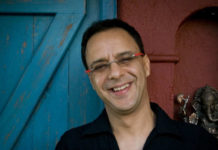 ‘Shikara- A Love Letter From Kashmir’: Vidhu Vinod Chopra directorial to not release on big screen?