Small screen actress Sumona Chakravarti says that she loved doing theatre but decided to make a switch to television as it was not “paying enough”. Sumona rose the popularity from her role of Natasha in “Bade Achhe Lagte Hain”. She even appeared in the shows like “Kahani Comedy Circus Ki”, “Comedy Nights with Kapil” and currently she is playing the role of Sarla Gulati, a girl deeply in love with her neighbour Kapil Sharma in the show titled “The Kapil Sharma Show.”

During a recent interview, Sumona says,”I love the craft of acting and I do theatre, television, and films only because I love acting. I don’t have any reservations when it comes to these three mediums. When I was doing theatre, I realised it was not paying enough so I looked at the television and after several years of hardships I got my due because of television and eventually, films happened.” Sumona said that the industry typecast, but she tries her best to avoid getting pigeonholed, “When I played a gray shade in “Bade Aache Lagte Hai” I was only getting offers for negative parts for the next six months. I did it (negative part) because I wanted to try something different. With ‘The Kapil Sharma’ show, everybody wants to offer me comedy parts only. So, it does happen for a bit but then I am choosy about work and I do wait for a good offer to come my way.”

Sumona is gearing up for her next project titled “Dev”, a fine thriller series. About her next project, Sumona said, “With the concept of finite series you know there is a start and end to the show. It is not a regular show. It is fictionalised mystery thriller, there are drama and romance as well.” Sumona is playing the part of Meera Banerjee, a single mother along with Ashish Chaudhary in the lead role. “Meera has had a failed relationship, she is a young mother, who has a seven-year-old son. She talks to the dead people and spirits. Fate brings her into the life of Dev. Though they are at loggerheads when they meet, eventually they become closest of allies.” Sumona says. 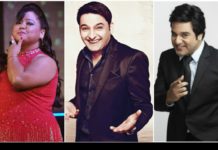 Second season of ‘The Kapil Sharma Show’ to reunite Kapil, Krushna and Bharti on small screen