The Indian Wire » Entertainment » Sushant is the new Gabbar in town and twitter can’t keep calm! 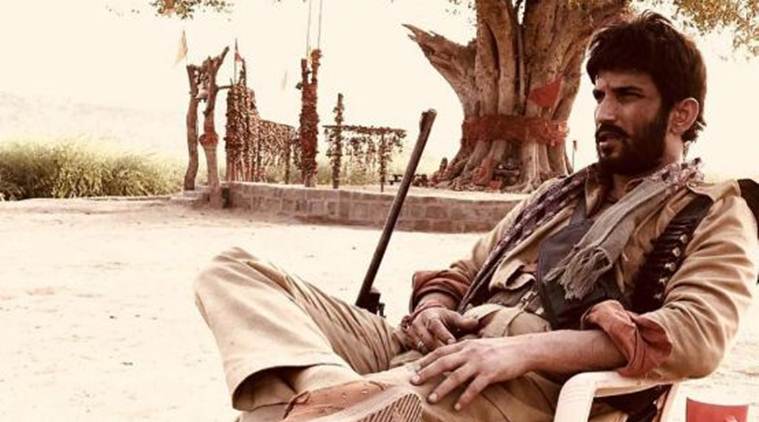 A picture of Sushant Singh Rajput shared by him broke the internet this morning which has been getting a lot of attention all over twitter with people’s astonished response. Sushant in his ‘gabbarwala look’ for his upcoming movie Sonchiriya is totally unrecognizable. He is seen in a rustic look wearing a khaki outfit, a gun on his side and a teeka on his forehead. The look is so unlike Sushant that it is getting hard to handle for the people.

Sonchiriya has a backdrop of Chambal where Sushant and Bhumi Pednekar are playing dacoits. Bhumi also plays his love interest in the movie. A source said, “Sushant is playing a dacoit for the first time and wanted to get into the character before the schedule starts, so he will leave for the location on January 12 to spend time with a few former dacoits. He will also lose some muscle weight to look the rustic part as well as learn rifle-shooting.”

Bhumi too has been preparing very hard to adapt to her role. “Bhumi has chosen dusty suburban fields to swanky gyms as her training ground and her workout regime now includes walking with buckets filled with water on her head under the boiling sun, sweeping and cleaning floors, walking barefoot in dusty fields and lanes, grinding wheat, among other rigorous household chores that rural women in India do.”

The look as disclosed by Sushant for Abhishek Chaubey’s movie is surprising twitter and garnering a favorable response. Here are some tweets by Sushant’s fans:

I can't give you a bigger compliment than 'I can't recognise you.'

Super impressed!! You are actually looking like a dacoit

You are justifying your character so well.. All the best.♥

We are mighty impressed by this transformation. Are you?