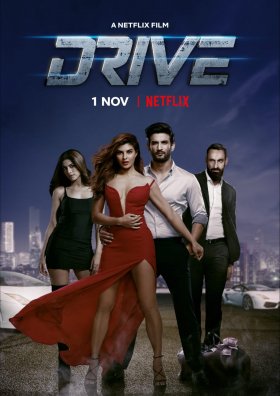 The trailer of Sushant Singh Rajput and Jacqueline Fernandez starrer Drive has been released today. Karan Johar, the producer of the film, took to social media to share the news about the trailer launch. He wrote, “Strap in tight…your heartbeats are going to start racing!!! Trailer out now! #Drive releasing on #Netflix on 1st Nov.”

The film was initially supposed to have a theatrical release on September 7, 2018 but this was further pushed to June 28, 2019. Finally, the film will now be released on Netflix on 1 November this year.This would also make it the first original film from Karan Johar’s Dharma Productions to release on the streaming platform.

Directed by Tarun Mansukhani, the action-thriller also stars Boman Irani, Pankaj Tripathi, Vibha Chhibber, Sapna Pabbi and Vikramjeet Virk while the story of the film revolves around the manhunt for an infamous ‘King’ for a robbery of 300 Kilograms of gold.

Talking about the latest deal of his production banner with Netflix, Karan Johar said in a statement, “Our vision for Drive was to make a film that elevates the genre of action-heist films. With nail-biting chases and action sequences, fronted by a spectacular cast, Drive combines the best of Bollywood storytelling with international production quality. I’m thrilled to partner Netflix once again in bringing this incredibly fun film to millions of fans of the action genre around the world.”

He also received wide appreciation for his work in Abhishek Chaubey’s Sonchiriya where he worked with Bhumi Padnekar, Manoj Bajpayee, Ranvir Shorey and Ashutosh Rana.

On the other hand, this year, Jacqueline was seen in an item song in Saaho that starred Prabhas and Shraddha Kapoor.

Watch the trailer of Drive here: