Vicky Kaushal starrer ‘Uri: The Surgical Strike’ had an honorable run at the Indian box office and it completed 100 days in theatres. The first blockbuster of the year is only behind historical blockbusters like ‘Gadar’ and ‘Dilwale Dulhania Le Jayenge’.

In spite of tough competition, reduced screens and shows, and several footfalls along its run, the film is standing strong at the box office.

About the film’s long run at the box office, film critic and trade analyst Taran Adarsh tweets, “While *most films* run out of fuel in 10 days, #Uri completes 100 days in theatres… An achievement that’s extremely rare in today’s times. #UriTheSurgicalStrike”

While *most films* run out of fuel in 10 days, #Uri completes 100 days in theatres… An achievement that's extremely rare in today's times. #UriTheSurgicalStrike pic.twitter.com/ZUjHbV8jVW

The film opened up to positive reviews from the audience. The opening day was good news for the filmmakers as it managed to collect ₹ 8.20 crores on day-1.

The film is based on a surgical strike carried out by the special forces of the Indian army on September 29, 2016, avenging terrorist attack in Uri base camp on September 18, 2016, which killed 19 unarmed Indian soldiers. All the brave soldiers who went for surgical strike returned unharmed killing 35-50 Pakistani terrorists. They all received awards for their bravery on Republic Day in 2017. 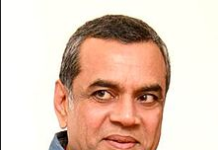