After Virat- Anushka’s dream wedding, news about various other long term couples planning on tying the knot this year is making a lot of buzz around tinsel town. Now it’s Varun Dhawan and his designer girlfriend Natasha Dalal who are rumoured to take wedding vows very soon.

Although the couple have never given an official confirmation of dating each other but the two are often seen together holding hands, appearing at events together, looking head over heels in love with each other. Several pictures of the alleged couple also keeps appearing on the internet time and again, affirming the conjectures about their relationship. 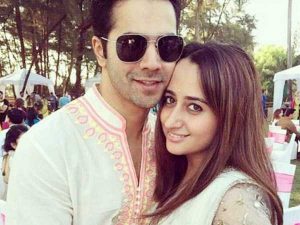 Now, Filmfare magazine has gone on to speculate that the two might end up getting married anytime soon. The news initiated when Varun got a new apartment and shifted there. Varun was reported saying to Times Now, “I have just moved into my new house, and I want to enjoy this part of life for a couple of years before I think of the next step”.

2018 might be the year of celeb weddings. Apart from Varun- Natasha, Sonam Kapoor may also get married to her businessman beau Aanand Ahuja. Not only her but Ranveer Singh and Deepika Padukone may also tie the knot by the end of this year.

Varun Dhawan has been having a fantastic professional time with a number of promising projects in the pipeline. He’ll be seen with Anushka Sharma in Sui Dhaaga and opposite debutante Banita Sandhu in October. Karan Johar, too, has signed him for his next Ranbhoomi.

With such a flourishing professional career, Varun might as well settle down with Natasha sooner than we think.