After Amitabh Bachchan it’s Varun Dhawan who has been honored with his wax statue at Madame Tussauds, Hong Kong. The very excited Varun flew all the way to unveil his statue along with his parents, David and Karuna Dhawan.

The wax statue, although easily distinguishable from the original is a remarkable attempt at portraying Varun at his best. It flaunts the well shaped bod Varun is well known for, striking a pose of his famous song “Saturday Saturday”. The statue was unveiled amidst an interactive session between Varun and his fans where Varun also took his shirt off, showcasing his abs. 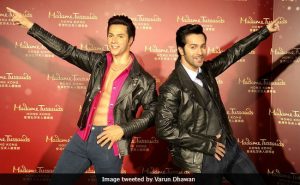 Varun was accompanied by his parents, David and Karuna Dhawan to mark the occasion. They too got on the stage to strike a pose or two with the wax statue. The happiness was evident in the gleaming faces of the proud parents. Varun who seemed enthralled at the event said, “This is a dream come true. The first time I visited Madame Tussauds in England with my parents and brother I posed with the statue of Mahatma Gandhi. Today I am very emotional as I see my own statue here. 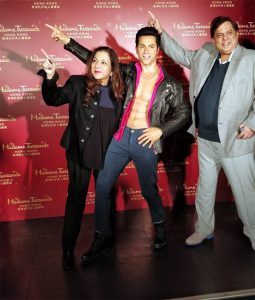 In October, Varun shared pictures on his twitter account showing the measurements being taken for his wax statue. It took around more than 200 measurements to come up will the final outcome that is a marvelous creation. Varun himself gave his equal input in helping the team with the preparations. After several hair and eye color matches, the outcome is very similar to the original.

Here’s the video of Varun unveiling the statue:

With the happy faces of the  Dhawan family, we can rest assured that this wax was all pleasure and no pain. Way to go, Varun!

Shahid Kapoor is the quintessential Bollywood hero, says Prernaa Arora on casting him for ‘Batti Gul Meter Chalu’
Akshay to be part of remake of Tamil horror comedy Kanchana 2