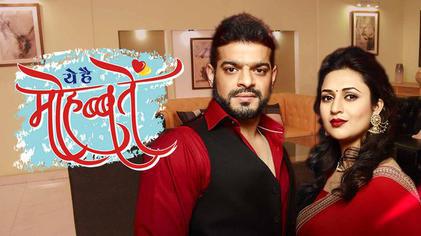 The episode begins as Ishita goes to show her family the basement under her clinic where Raman was kept while he was in a coma. When they enter the room, Ishita is surprised to see that the room has been cleaned and there is no equipment for medical support for a patient. Shardul commends Arijit’s quick work in emptying the room. Simmi is angry with Ishita and begins to fight with her. Toshi ji tries to stop them, but begins to get sick because of the stress. The family take her home to rest. Ishita and Raman discuss about the situation, and can’t explain why Shardul is doing this with them.

The DNA test reports arrive, and Ishita is already dreading that there will be a fault with them. Simmi reads the reports and declares that Shardul’s DNA matches with Raman’s father. Ishita accuses the person who did the tests for turning against her, but he says nobody paid him and he performed the tests with total honesty.

Shardul then invites a psychiatrist, Sunita, who asks Ishita if she’s taking her pills or not. Ishita and everyone else is confused. Sunita says she was treating Ishita, and is worried that she has gone off her medication. Ishita also received electric shock therapy as treatment, she reveals. Ishita rejects all her assertions and says she never sought treatment with Sunita. Ruhi decides to investigate more about Ishita and Sunita’s meetings but Shardul comes and interrupts them. He takes Sunita away, and tells her to treat her.