Be YouNick’s new video “The Mass Cheating” was published on July 12, 2019. The video has garnered a massive response and within less than 24 hours, is #7 on the trending list. The video has over 1.2M views.

The video is one of its kind, not only because of its content, but it is also the first video that has surpassed the duration of 10 minutes. Up until now, Nikunj has only released videos that have a shorter duration, because according to him, if you can’t say something within the first few minutes, you won’t be able to say it anyway. Nikunj’s content is always crisp and has the perfect blend of humor incorporated into it.

In this video, Nick and his friends decide to cheat in the exams and that too mass cheating. Their professor is doubtful and decides to supervise the exam on his own. What happens in the examination hall is next level crazy.

Read what we think of the video in our previous post below.

Watch the video below or head over to Be YouNick’s YouTube. Be YouNick: “The Mass Cheating” on YouTube sends the coolest college vibes 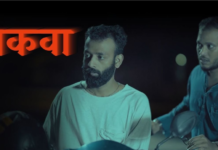