Shah Rukh Khan’s ‘Zero‘ which was expected to become one of the biggest openers this year, opened as another disappointment of the year after ‘Thugs Of Hindostan’. The film underperformed at Box Office and collected Rs 20.14 crores in the domestic market, on its first day, much less than anticipated.

It was the solo Bollywood release yet it did not perform well, on its day 1. The romantic drama opened to mixed reviews from audience and critics. Aanand L. Rai’s directorial also stars, Anushka Sharma, Katrina Kaif, Zeeshan Ayyub and Tigmanshu Dhulia.

Film distributor Girish Johar predicted about the film’s first day earning, “Being a non-holiday Friday, the film is expected to earn something between Rs 25-27 crore. Clocking around 3500 screens, everything is going well for SRK. His character Bauua Singh has become a household name because of a well-crafted promotion strategy.”

The filmmakers promoted the movie in full swing. Shah Rukh’s character got his own Twitter handle which was verified. Trailers, songs, promo videos, and dialogue videos were released every now and then to grab attention. Filmmakers didn’t want the movie to get out of the audience’s mind. But the film reviews and word of mouth, has now made it hard for the movie to survive long at the Box Office. 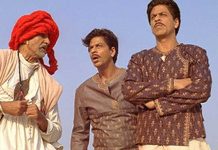