Can Indian cities serve the prospects of growth for its migrant population amidst Climate change and Pandemics? Nothing could govern our minds better when the Indian media showcased different stories of helpless migrants during the lockdown, necessitated by the pandemic.

Our eyes could trace those deserted faces, the hearts which knew the address of their homes but the minds having no bare idea of how to reach there.

With no consistency of food or shelter or warmth, people with no future began their journeys in search of one.

But those migrants were not the only one leaving their temporary or permanent abodes in search of a new beginning: some may secure this way to progress while others may make this stride to escape severe impacts of climate change.

As per the study composed in the academic journal Nature, this migration from vulnerable rural areas is expected to worsen over the next few decades.

There is a dual hit in this scenario: uncontrolled migration from source lands and imbalance caused to cities those are even devoid of ensuring any safety and security for their poorest residents.

Even the government falls short of addressing their issues and strengthening their spirit to a decent existence. They are the ones facing rains, floods, storms, heatwaves, chilling weather.

Most of the times in their lives, they have never been attended humanely or given the agreed wage. They have barely no recourse to earn what they seriously deserve: a better chance at survival.

We talk of the indispensable Golden trio in Indian law, composed of Articles 14, 19 and 21, the scope of which seems to fall short in everyday lives.

India is vulnerable, not only in just single aspect and for better or worse, there are other such countries sharing similar concerns.

Has this migration started due to an increased visibility of climate change?

India’s 2011 population census claims it otherwise, mass mobilizations have always been underway. 455 million Indians, as per the data, can be called migrants (64% from rural areas).

That is, one out of every six urban Indian may end up living in a slum with unhygienic conditions and inadequate facilities as per the stated census. 2021 census, once collated, can depict further trend even clearer.

The study in Nature journal explains: “A large majority of the migrants are from the low-income states of Uttar Pradesh and Bihar (36% of the total out of state migration).” 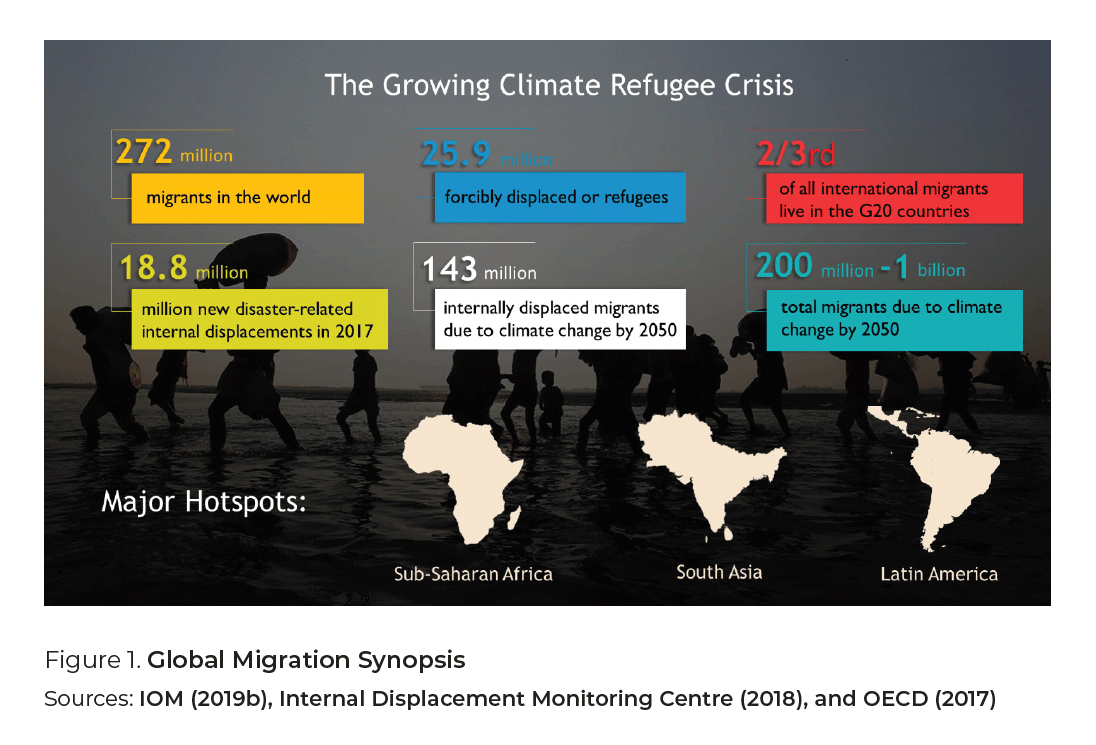 These fertile regions had been home to agriculturists and allied Industries of all sorts, but with the extreme pace of Climate change and regressive profiteering practices, lands have begun losing their sheer productivity.

At times, these migrations are fueled by immediate causes like storms, cyclones, heatwaves or extreme inundation etc.

Most of Indian forests are fire-prone (as per the forest survey of India report), most of South Asian lands are flood risk exposed either due to erratic Monsoons or coastal factors.

For example: 17-19.9 million people in Indus basin and 107.8-134.9 million in Gangetic basin are impacted with a significant notified increase in this risk, nearly 36% and 26% respectively.

Similar data is reflected from the PLFS (Periodic Labor Force Survey) data and the unemployment data provided by CMIE, which is enough to disturb the nation with ongoing trend, there is a significant shift back to agriculture from manufacturing (from 42.5% to 45.6%).

This happens as out of no other immediate opportunity during the pandemic, a migrant may find it easy to be absorbed back in Agriculture, there is no dearth of disguised employment in it.

This gets even more dominant as Climate change continues to turn the wheel, inducing more insecurity in our food systems and humans out of despair, continue to exploit more forest or other serene ecosystems like grasslands, under cultivation and accelerate change.

Will this excessive mobility option remain in warming Earth? Most probably not. As more people get driven out towards economic growth centers, the competition will increase with no increase or rather decrease in resources.

Therefore, limited will be the chances for further migration and consequent survival.

The future seems grim, because as the generation undergoing migration will lack physiological benefits available easily in Urban growth centers.

A 2016 study by UNICEF clearly described how travelling distances to fetch drinking water can waste valuable lifetime of kids, especially girls and women. Something so easily available in cities, can even threaten school attendance for them.

UNICEF considers WASH (Water, Sanitation and Hygiene) to be fundamental for female education.

Initial years are crucial for health and human capital formation. Yes, we have the benefit of productive youth in upcoming decades which other developed countries may not. But this may only serve the Nation if they are molded right.

Why these migrants are more vulnerable and marginalized?

According to the study: In wake of any climate calamity, “the marginal migrants – who usually have the fewest resources to protect against external disturbances – are among the worst hit by these impacts.”

This is true as they thrive within crowded cities with bare minimum resources and uncertain, unskilled jobs to pay for those meagre needs. Their insecurity is their biggest vulnerability.

A medical practitioner explains in a study: “The chances for infectious diseases to spread increases when migrant workers are forced to stay together especially in labor camps or in shared accommodation sites.”

“They are often overcrowded and congested with poor hygiene and sanitation facilities. The high humidity levels add up to their vulnerabilities, as they are more prone to infectious diseases that spread through sweat and touch.”

All they aspire is to earn a decent living with no voice to raise their concerns and hence, attract no attention from any government authority.

A migrant from a metropolitan slum explains: “We (including his family members) are scared of falling sick. With my meagre income, I cannot afford to go to hospitals. If we have to go to hospitals, I have to borrow money from the local money lender at high interest rates. To repay the loan, I have to borrow again from others. Thus, I end up in a never-ending debt trap”.

With PMJAY (Jan Aarogya), there is some light in this direction but for those who know and possess working biometrics.

Their day-to-day judgements are merely based on securing short term monetary gains rather than addressing something so complex like Climate change, something they may refer to as penance for their desires, acts of God.

Delhi, Mumbai or established regional growth centers are the only hope for these distressed migrants. UN World Cities report states this number to be four of every 10 Indians by 2030.

Though a few schemes like SVANidhi, PM Shram Yogi Mandhan, MGNREGS etc. cover their social security aspects, but with lack of awareness and time, their immediate livelihoods continue to suffer.

An excerpt from a related study done on Indian cities: “Our findings show that only 66 per cent of the total migrant workers’ population had access to the respective state-sponsored welfare schemes meant for the migrant workers and the poor in the city. Interestingly, none were aware of any social protection schemes.”

“The associations of migrants with rights-based civil society organizations were also limited. Around 12 per cent of the migrants in Mumbai had association with some charity-based NGOs, but were not receiving any welfare benefits from these organizations.”

Do past pandemics offer us a hope to change?

A June report from Indian Real estate consulting firm has observed that how pandemic influenced 60% of new houses prepared in Indian metros to root up in the peripheries and not crowded in the center, compared to 51% before the pandemic.

Can this grim future be changed to a brighter one?

Nothing seems impossible to a human determined enough, for better or worse.

Democracy is for the people. If there are a few facing most grievous and dreadful of impacts by Nature and not being boisterous about it, it’s a concern.

Therefore, migrants are found to have relatively weaker social ties with other institutional stakeholders in the society.

The marginalized and impacted communities need an active participation in implementation strategies against a bigger force they experience more than any officer presiding the policy orientations.

As per World Resources Institute: Locally led adaptation strategy “recognizes that the people closest to the effects of climate change – especially those facing marginalization due to systemic inequities in income, education, social capital, and political power – require the financing and decision-making power to ensure that adaptation investments reflect their priorities.”

“Sustainable urbanization“ is indeed an essential quadrant to the global effort ensuring “build back better” from the pandemic’s setback.

We have seen how most of our vulnerabilities are rooted and shaped by the prevailing historical and contemporary socio-political and economic structures in society. We know they can be eliminated easily with constant efforts and inclusive policies, in time.