One of the supposed silver linings of the Pandemic were the increased involvement, acknowledgment and vigilance of general public to the theories of climate change.

It also came to shore the very negligence of the current climate conundrum by our elected leaders and that no Human force can provide an apt shield to the forces of Nature.

Amidst such an extensive debate and discussion, one may have noticed how the World around us is changing so fast.

The sparrows, commonly found in 90s are so less in numbers now, the indicator species like bees, wasps, butterflies, damselflies etc, all just disappeared without a common man noticing.

It shakes us to the very core, comprehending that this has all been done by us, step by step.

Amongst the many proponents of climate change and its impact, finds the field “extreme event attribution”.

Since 2011, NOAA(National Oceanic and Atmospheric Administration) scientists have contributed for a special issue of the Bulletin of the American Meteorological Society called “Explaining Extreme Events from a Climate Perspective.”

It undertakes studies that attempt to determine the causes of a selection of the previous year’s extreme events and to detect whether global warming and its side effects were among them.

In simple terms, it helps in detecting a stronger link between the planet’s warming and its changing weather patterns.

An Extreme event attribution tells us how much of the credit or risk for an event (or type of events) should go to global warming and how much should go to natural weather patterns or random climate variability.

Its studies also render scientific value by giving a chance to climate experts to test and improve their models simulating different kinds of extreme weather events.

The more realistically models reproduce extreme weather events, the more we can trust them to provide helpful information on what the future may hold.

The popularity of the above study has resurfaced after the increased climate extremities, especially the cold air spills in US.

More than 350 peer-reviewed studies looking at weather extremes around the world have been published. Ranging from heatwaves in Sweden, cyclones in Bay of Bengal, droughts in South Africa to flooding in Bangladesh and hurricanes in the Caribbean.

The result is mounting evidence that human activity is raising the risk of some types of extreme weather, especially those linked to heat.

According to the data analysed by Carbon brief, following has been found:

Over the collective evidence of past 20 years, the study gets heavily dominated by studies of extreme heat (33%), rainfall or flooding (20%) and drought (17%).

Together, these make up more than two-thirds of all published studies (70%).
We can therefore infer that the number of extreme events studied has grown substantially over the past 10-15 years.

Increased oceanic disturbances:
Due to the spike in ocean temperatures, the proportion of strongest storms is increasing about 8% a decade, one of the research shows. All these linear trends are statistically significant at 99% level. Thus the coastal regions of Bangladesh, India and Myanmar have indeed become more prone to the incidence of severe cyclones during November and May.

Cold spells in US: winter is coming
The polar vortex is an enormous, three-dimensional giant of winds that surrounds the North and South poles during each hemisphere’s winter, located about 10 to 30 miles above Earth’s surface, in stratosphere. 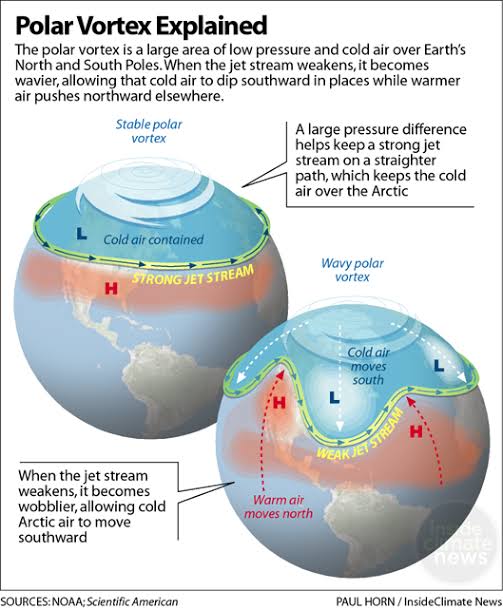 They blow from west to east with sustained speeds easily exceeding 100 mph and temperatures lower than minus 110 F at times.

These are confined by strength and position of the polar jet stream, another fast-flowing river of air in the troposphere beneath the polar vortex.

When the jet stream changes, it affects the movement of weather systems, causing different parts of the world to see much warmer or colder, or much wetter or drier conditions.

Now as the Arctic rapidly warms, it can make weather extremes more likely. Specifically, the heating Arctic might make the jet stream more prone to meandering to the north or south, kind of like a loose, droopy rope. This could, for example, allow polar air to more easily swoop down from the Arctic.

Droughts, flash floods, wildfires and increased precipitation are falling on us at unpredictable frequencies around the globe along with the invisible and indirect repercussions like the pandemics, disturbed sex ratios, dam spilling etc.

It is therefore wisdom to feel the urgency of our climate deadline and calling for action on a scale that matches the threat. People anyday want a healthy environment and clean resources to survive.