The Indian Wire » Environment » IPCC report 2022: sixth assessment on how to respond because it’s ‘now or never.’ The Secretary General of the United Nations, Antonia Guterres reacted to the recent findings of the Intergovernmental Panel on Climate Change (IPCC) sixth assessment report, stated that “this is not fiction or exaggeration. It is what science tells us will result from our current energy policies. We are on a pathway to global warming of more than double the 1.5-degree limit (Celsius, or 2.7 degrees Fahrenheit), which was agreed in the Paris Agreement of 2015.”

This report highlights that the global temperature will stabilize only when carbon emissions reach net zero. For 1.5C, this means achieving net zero carbon dioxide emissions globally in the early 2050s; for 2C (3.6 F), it is in the early 2070s.

The report explores various risk factors as well as their impact on climate change, including withering droughts, extreme heat, and a growing threat to food security for thousands of people.

Therefore, increased floods and drought along with the heatwave are adversely affecting food availability and prices of essential commodities, resulting in increased undernourishment in certain countries.

How does it affect the ecosystem?

The risk will rise with escalating temperature. It would not only affect human beings but also adversely affect all species and our ecosystem. As temperature continue to rise, glaciers across the globe are likely to either disappear or lose mass, increasing the risk of flooding and reducing suitable habitat for various species.

Glaciers are reservoirs for a large fraction of Earth’s freshwater. When the ice melts the water ultimately flows into the oceans, which in turn results in an increase in sea level. Both IPCC and the US National Climate Assessment believed that ice-loss was the largest contributor to sea-level rise in the last few decades, and will contribute to rising sea levels for a century to come.

Furthermore, overshooting of temperature and prolonged heatwaves might lead to a loss of agricultural yields and decrease labor productivity. It will further jeopardize food security and exacerbate health risks like malnutrition.

Apart from economic and political challenges, climate change will have dramatic consequences even in the social construct. Climate risks disproportionately affect poor economies and people. Unfortunately, the economies most vulnerable to climate change are the ones who contribute the least to the accumulation of greenhouse gases.

Including a Q&A session with registered media. https://t.co/iIl81zXev7

In addition, the majority of the vulnerable and low-income groups depend on naturally available resources for survival. Therefore, the rising temperature may exacerbate the pre-existing disparities in access to clean water and proper food.

IPCC has warned that droughts in the Amazon will spur the migration of rural communities to cities by 2030 and further marginalize indigenous communities.

However, on a positive note, IPCC has urged governments across the globe to ramp up efforts to curb emissions, insisting that it is still possible to halve the mission by 2030.

IPCC Chair, Hoesung Lee said that, “I am encouraged by climate action being taken in many countries. These are policies, regulations and market instruments that are proving effective. If these are scaled up and applied more widely and equitably, they can support deep emissions reductions and stimulate innovation.” 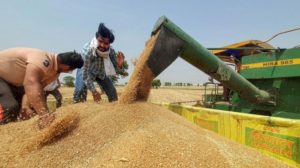