The Indian Wire » Environment » Rights of Nature: Human right to exploit versus the rivers right to flourish Amidst the greater dangers to our planet, humankind has committed the worst one by poisoning and smothering the planet’s rivers.

The holy river Ganga too has faced the disregard. A new study reveals how it remains flooded with microplastics, killing its biodiversity and making it obnoxious for human use.

With the river’s width shrinking considerably in past 25 years, several experts are doubtful of the very existence and life of the river.

“Essentially all along microplastics are flowing into the river system. It does reflect or suggest a direct linkage between the poor state of both solid and liquid waste management”, a participant of the study explains.

Although the government of India has acknowledged and started preserving the Ganges since last 40 years, re-invigorating the cause by introducing the Namami Gange and Ganga Council in 2015 to clean and protect the river. Other under-guarded attempts include the Ganga Action Plan (GAP) in 1985 and the National Mission for Clean Ganga in 2011. But so far, there has been negligible revival of purity in the river.

However, it is not just the case with a river, all the majestic have been enduring the same fate.

Though many new water bodies are getting formed as global warming rises but there also had been a few those lost their due existence in dearth of serious restoration measures and there are many more which possibly can disappear in future.

WWF has time and again, highlighted the global watersheds at risk and reassert the importance of integrated river basin management solutions for saving these. Some of the threatened ones include the Salween, Danube, Rio Grande, Ganges, Indus, Nile, Yangtze and Mekong.

All the beautiful deltas, barely surviving the humankind-inflicted challenges.

Rights of Nature: a difficult yet no oblivious path

Rights of Nature means to recognize and honor that Nature do have rights, to question its own degradation. Ecosystem entities like rivers, trees, mountains, animals all have rights at par with Humans.

It solemnly gives Nature the right to exist, persist, maintain and regenerate its vital cycles.

Like the Buckminster Fuller believed: “You never change things by fighting the existing reality. To change something, build a new model that makes the existing model obsolete.”

Many countries and communities have so forth, began to understand and alter the way these natural resources are considered available for human exploitation.

For the first time in Canada, the Magpie river has been granted a gamut of 9 legal rights by local authorities including the right to flow, the right against pollution and the right to sue, above all.

This fight was led by the indigenous Innu people, they explain: “People are suffering a lot, with intergenerational traumas linked to the past.” 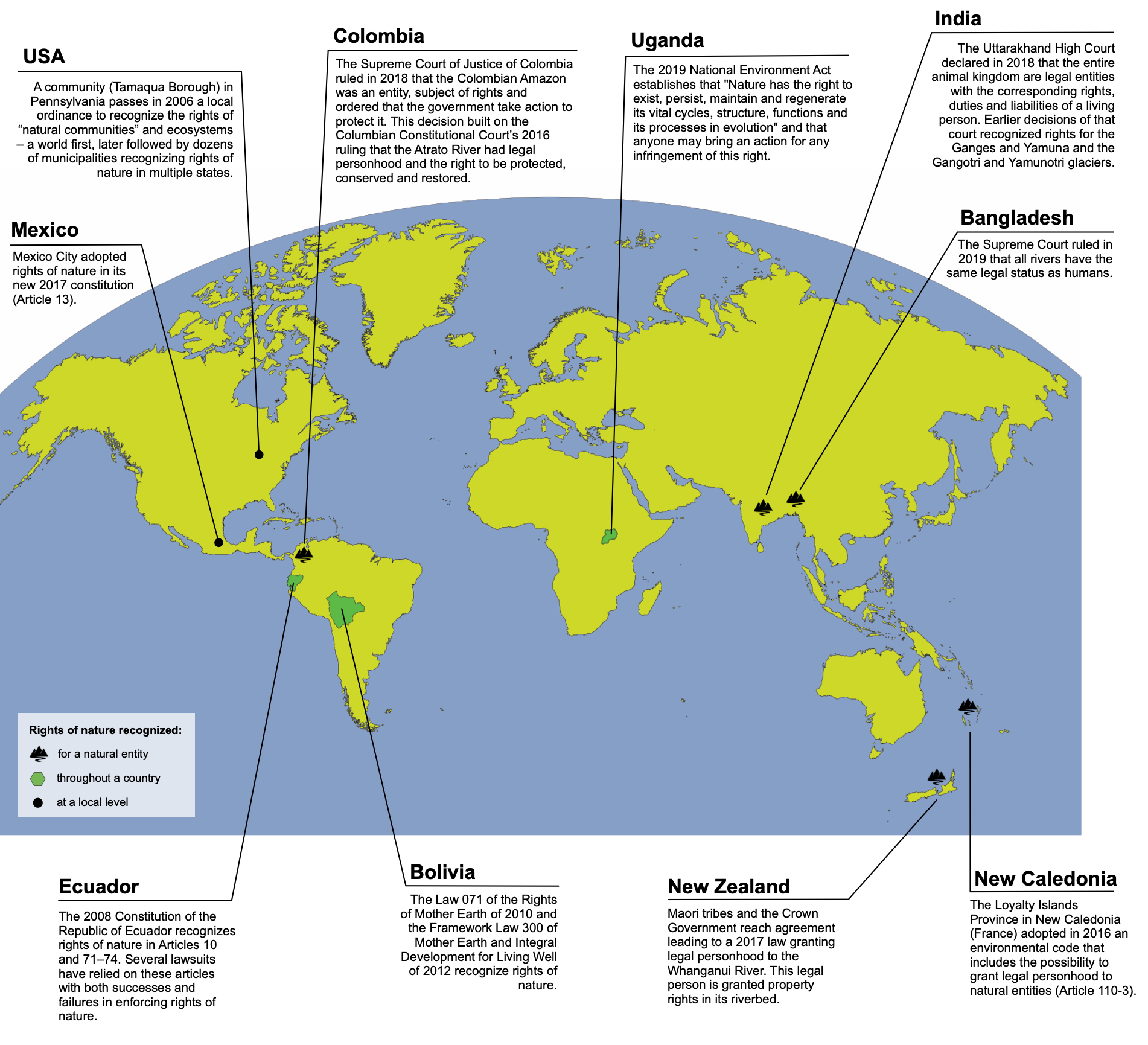 Ecuador innovated this method back in 2008 when it cherished and embedded the rights of nature in its constitution.

Since then, countries like Bolivia, Mexico, Colombia have devised the legal machinery to protect nature, while others like New Zealand, Australia and Bangladesh have emphasized on protecting its rivers.

Even many states of the US have embodied these rights within its structure, with the increasing threat.

This escalating rights-of-nature rebellion is pushing local as well as the national and international authorities to recognize their natural entities and place them in law.

This is achieved by either granting them legal personhood or an independent right to flourish. But several questions do remain.

Who enforces such a wide right?

Who decides when a river needs to use a particular right, like the time to sue?

A few even dare to ask then. Can a river be sued when it causes inundation and loss to lives?

Has using these ‘global commons’ (resources equally available to all living on the planet) never helped Nature?

An author from Melbourne University clarifies: “There is increasingly an attempt to give rivers a right to flow and so the Magpie River in Canada has got the right to flow, but how you enforce that right is very unclear.”

“And if that’s not actually embedded within water law, which it isn’t yet, then it’s probably not worth the paper it’s written on.”

Since the inception of these rights in Ecuador, its courts have attracted over a three dozen lawsuits in such sphere, only being enforced ion papers and not on ground.

A story from India: the land of Holy rivers

Non-living entities acquiring personhood and a legal representation, is not something new here.

Juristic rights to Lord Rama had been granted in perpetuity for the long-drawn Ayodhya case, making him a litigant in the same.

The supreme court recorded in a case: “The very words Juristic Person connote recognition of an entity to be in law a person which otherwise it is not. In other words, it is not an individual natural person but an artificially created person which is to be recognized to be in law as such.”

Therefore in 2017, an Indian state high court attempted to give the Ganges and Yamuna River the very legal personhood but the decision was appealed in the supreme court and been pending since.

Also states like Uttarakhand have devised a Gross Environmental Product to integrate Nature as an intrinsic part of its economy.

Although Europe is home to Climate activism but it lags behind other continents in case of indigenous people challenging the concept of possessing and exploiting nature.

‘Rights of Nature’ aims to topple the same.

It finds it irrational to say that the world has rights to life and property but the nature’s rights are barely considered to exist.

An environmentalist lawyer explains: “The changes in the legal system deeply affect the psyche. If the law says I’m in relationship with the ocean and the river then it won’t be long before people start behaving as if we are interconnected with the other life forms on the planet.”

Nature, rivers, forests etc. surpass boundaries created by man. All we need is greater preservation insight for these resources who cannot speak for themselves.

For if we don’t begin conserving the very cradles of the world, we may end up losing money, resources and undoubtedly our lives.

Renewables of the world and the environmental crisis it is bound to create, if not attended now!
India’s Landslide saga and why India needs to be concerned as these are surely not the lasts or worsts
Comment