Sugar: a source of bitterness for may lives, polluting water and making the air unsustainable ‘Don’t take too much sugar’, we are so concerned of the excess sugar that can harm our body but have we thought of what it does to the humanity, Environment and planet while coming in from the fields to our drinks?

To produce sugar in India, sugarcane is planted thrice a year i.e., in October, March and July, involving 50 million farmers and others making it a big business in India.

This may include direct employment to over 5 lakh skilled laborers in the industry.

An industry that has its links embedded with Agriculture, is not difficult to find and sustain in India. Yet this Industry in the long run, can harm more than it provides.

Several farmers, particularly from Western UP known for its sugar production have suffered a grave debacle, all their wheat destroyed by the excess water discharged from Sugar plants.

Sugar mills and its distilleries have proven to be among India’s top-most polluting industries.

The sugar industry ranking third for even the amount of wastewater produced is a cause of concern as apart from only polluting through bulk of toxic agricultural chemicals, it also wastes excess water and degrades the very source of sustenance, our Rivers.

A large quantity of water is put to use during the entire cycle, marking the start with the production of sugarcane and an end with the release of heavy effluent from these mills.

Notwithstanding the losses to groundwater levels around, these effluents have serious implications for human health and livelihoods along with devastating effects on the soil, air, and water.

Producing sugarcane can most of the times, vanish any possible habitat surviving therein and cause serious biodiversity loss.

As per the Composite Water Index by Niti Aayog, most of the regions in the country are already facing severe water stress. Marathwada, Saurashtra, Bundelkhand are just a few names where lives are repeatedly relinquished arising out of such helplessness.

In Uttar Pradesh alone, the biggest few sugar mills generate as much as 32% of the state’s wastewater and discharge up to 85.7 million litres per day (MLD) into the intricately laid mesh of rivers by Nature.

And therefore since 2014, about 23 court cases  alone in the state have been filed against these sugar mills for the damage they cause to Environment.

Sugar processing induce certain changes in water quality to make it unfit for almost anything. With more of solids, chlorides, nitrates, magnesium, calcium, and sulfates, the water at large disturb the oxygen balance in water bodies and destroys riverine ecosystems, especially if leaked Molasses find its way.

The state of Uttar Pradesh is also home to most of the country’s produce and known as the ‘sugar bowl of India’. With nearly 155 sugar mills, the state also finds home to the second-largest processing industry in India.

The Industry is spread across the states of Uttar Pradesh, Bihar, Haryana and Punjab in the north and Maharashtra, Karnataka, Tamil Nadu and Andhra Pradesh in the south (hosting Tropical climate, South has higher yield per unit area).

It all began with a landmark ruling in 2014 that saw the famous Simbhaoli Sugar Mill, producing about 1,000 million tonnes daily, being ordered to pay a hefty fine of 50 million Indian rupees ($670,000) for polluting the Ganges River.

An expert explains: “The water that the sugar mill releases is not as toxic as that coming from other chemical-intensive companies, like pharmaceuticals or paper. But it has the potential to pollute water bodies by affecting streams and groundwater ecosystems.”

One can look at Papua New Guinea to realize what this industry can do if left unregulated. All thanks to sugar production today, soil fertility has reduced in the country by a staggering 40% within just 30 years.

Different rivers like River Niger, River Zambezi, Mekong River, and Indus River have all continued to face decline in their water content and the source due to such heavy harm in the vicinity of such processing. 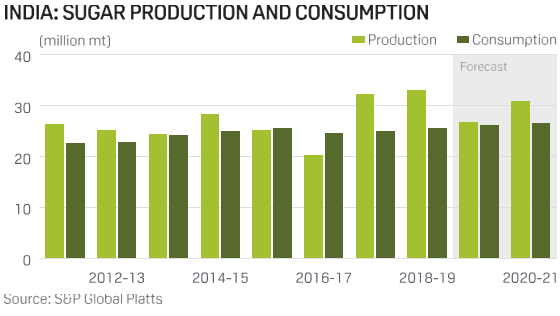 Sugar production provides an impetus to agricultural burning as farmers do this to ensure that the quantity of leafy material is reduced for swift transportation and better processing reducing wear-tear of its equipment but tends to cause air pollution.

This can lead to release of several toxins, affecting the air quality including nitrates, carbon compounds, sulfates and even add to the particle pollution, finding its way to our lungs.

A villager of Muzaffarnagar tells her plight: “Everything turns grey and smells like ash. You even keep the water in the open for a few hours, and it turns yellow as well. How often should I keep cleaning this house?”

The processing units even use ‘bagasse’ or the residue from the crushed canes, as a fuel which has 50% of moisture, again polluting the air around.

We know that Environmental Protection Act, 1986 (EPA) has held it mandatory for every industry to treat wastewater before releasing it into the environment using installed Effluent treatment plants (ETPs).

“If the pollution control boards receive any number that exceeds the permissible limit, the industry is sent a notice and serious action is taken,” CPCB explains.

But SANDRP tells a different side of the story: “It is not very difficult to forge the data and continue such behavior. The corruption is immense and accountability is low.”

“I have seen probes dipped in clean water, as a way of bypassing the monitoring measures put in place by the Uttar Pradesh Pollution Control Board.”

Though sugar is a significant part of most lives and hence it has spread across 120 countries with nearly 60 million acres of land under its dedicated production.

This significant economic dependency protects the mills from following stringent environmental regulations and being punished under the same.

Though it provides livelihoods to many but shatter the lives of several, slowly and painfully, too. But its killer impacts on Environment, especially in context of deteriorating water and air, has drawn the attention of many to this crisis in making.

India’s policy branch NITI Aayog undertook a study and found that 70% of water in Uttar Pradesh gets polluted, citing an unsustainable sugarcane production as one of the possible sources.

Oxfam however, elucidates saying that the lack of information and acknowledgement from monitoring agencies, makes the investigation process difficult.

In dearth of information and regards, nothing can be corrected.

There are progressive and sustainable sugarcane producing practices which can meet the increasing demand for sugar and the need to respect environment.

Through an extensive collaboration between farmers, mills, end-user companies and the civil society actors, many demand-side water conservation techniques have been introduced along with state-of-the-art Dutch and Israeli technologies for water-efficient sugarcane farming.

In India we have now begin the ethanol blending with an indicative National target of 20% by 2030. It can prove good in all ways;  reduce India’s oil import bill by $4 billion per year and simultaneously utilizing a byproduct from sugar mills that they burn or leave untreated.

With India working hard to achieve the Sustainable Development Goals and at domestic level, to serve the fundamental rights and Directive principles well, it can’t just be in denial of this evil anymore.