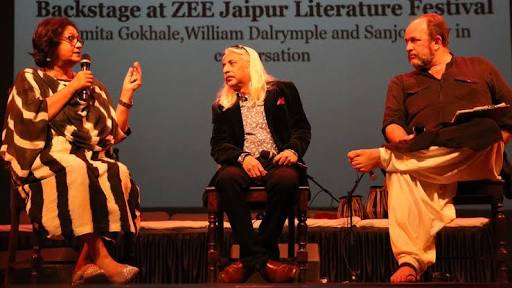 Writer and Festival director Namita Gokhale and William Dalrymple invite speakers to take part in the five-day programme set against the backdrop of Rajasthan’s beautiful cultural heritage and The Diggi Palace in the state capital Jaipur.

A great show is a show lined up for all the literature fans.Today is the first day of this festival and will continue until 29th of this month.Every year from past few decades this festival brings together a diverse mix of the world’s greatest writers, speakers, thinkers, humanitarians, politicians, business leaders, sports people and entertainers under one roof.

This is a flagship event of “Teamwork Arts”.The event has witnessed nearly 2000 speakers in the past decades and has welcomed million book lovers from across India and the Globe.

She is the founder, co-editor of the Zee Jaipur Literature Festival and Mountain echoes, the Bhutan Literature Festival. She is a writer, publisher, and festival director and has written 14 books. She has won so many prestigious awards.

He is one of the founders of Zee Literature Festival 2018 and also a co-director of this event.He is a renowned best selling author of so many popular books and has won many prestigious awards on an international level.

He is the producer of this festival.He is an entrepreneur of the arts and the Managing director of  Teamwork Arts.

Past year speakers have ranged from Nobel Laureates to various prestigious awards winners.This festival goes beyond Literature, the event has also hosted Amitabh Bachchan, Amartya Sen, late APJ Abdul Kalam, His holiness the 14th Dalai Lama and many others.

This year also the Festival is going to cover many delegates across the globe.The show is going to be a big hit.

Contempt petition filed against Karni Sena and four states
The story of how Bellandur Lake became the lake on fire!