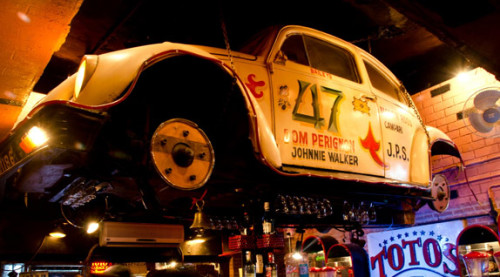 When wanting to ‘chill’ with mates what’s better than some ‘daroo’ to do you company. But it pays to get drunk when you have inflated alcohol bills instead of inflated beer bellies. Afterall nothing can kill the high like an exorbitant alcohol bill. Bindiya Chotrani empathises and lists down a few dives that could probably be dubbed as ‘humble-venues-for-daily-drunken-behaviour’. Time to opt for bar crawling over club hopping.

When wanting to ‘chill’ with mates what’s better than some ‘daroo’ to do you company. But it pays to get drunk when you have inflated alcohol bills instead of inflated beer bellies. Afterall nothing can kill the high like an exorbitant alcohol bill.

Bindiya Chotrani empathises and lists down a few dives that could probably be dubbed as ‘humble-venues-for-daily-drunken-behaviour’. Time to opt for bar crawling over club hopping.

Janata Lunch Home, Bandra
Well, we agree that the name is mouthful, but don’t let that dampen your spirits. Instead, choose to drink like a fish. From after-work punters to collegians, the place is frequented by patrons that are either adventurous or cash-strapped, all alike. There is cherry on the cake with you being able to buy and drink by the bottle.  You might in fact, want to drink straight out of the bottle, given that they give you a barely washed glass. However, don’t bother asking for a cleaner replacement. Your overworked waiter has more pressing business, like slamming more filthy glasses down on other tables. Don’t be bothered because once you’ve had a crack at the superb pub food on offer, you won’t really care. Instead here’s a tip: Drink yourself blind so you don’t remember the dirty bits the next day.

Gokul, Colaba
This drinking den is so famous that it features even in Lonely Planet. An old favourite the biggest draw of the place is its location – smack dab opposite Bade Miyan in Colaba and behind Taj Mahal Palace on Tulloch Road. Frequented by advertising professionals who are looking for a place to brain storm or unwind at, the place is filled with incessant chatter in the background. A bottle of beer and a plate of chicken or fish should not exceed Rs300. The air-conditioned section is where the real drinkers sit but you will always find that one odd woman there.

Yacht, Bandra
Another bar where you drink by the bottle, this place is slightly dingy with 3 sections. The patrons here include young guns, local traders and some couples on a PDA spree, avoiding the public eye. The snag: you don’t get any free snacks, and need to pay for the peanuts too. We suggest you call for bottled water when here. Avoid calling for beer, which is flat more often than not. And Nope! They do not change it for you. Have been wanting to dump your girlfriend since long, but no reason to quote. Take her to yacht. She will do it herself. The place is definitely good for a hard-drinking boys night out as long as you don’t use that loo.

Toto’s Garage Pub, Bandra
There’s a disclaimer for this one. ‘In a group of larger than eight? Take your custom elsewhere’. Ironic but most definitely true. Yet again, a total winner. Ask why? Cheap alcohol, an appealing selection of cocktails as well as beer, interesting decor, and rock music. Toto’s garage infact screams irony in capital letters. For starters, there’s always about twice as many people in there than should fit in that amount of space. Then there is the gravity-bending Volkswagen Beetle that hangs off the ceiling and the Omni-van cut-out that the DJ sits in. There’s the garage-like wire mesh that separates the seating areas, and in the world pre smoking bans, your ashtrays were clutch-plates.A pint of local brew and the chilli chicken, and cheese pakoras that make superb dates for your drinks should not cost you more than Rs. 250. Don’t think twice before you join the bar singing to an Iron Maiden chorus. And if you’re too drunk to remember the lyrics, just headbang like an angsty sixteen year old. Also, don’t ask us wht that mysterious looking man has his sunglasses on in bar so dark. Clean loos, separate for males and females, is a bonus.

Sunlight Bar, Dhobi Talao
A favourite amongst the youngsters, the name of this joint is misleading — it’s snugly built, allowing no natural light to enter the haunt. But beer flows cheap and the collegians swear by its starters. Need no more than Rs300 to get you a large bottle of beer and a starter or two.

Café Leopold, Colaba
Ever since it was featured in Gregory David Robert’s account of his time in Mumbai, in the epic Shantaram, Leopold has gained more notoriety than ever. Not stimulating enough to get you here, well then there is amazing food to indulge into along with that surprisingly decent selection of wine. And huge three litre (six pint) pitchers of beer that keep you and your meat some company. The story takes a darker turn when you notice the bullet-holes in the glass. On the night of 26/11, this is where the gunmen opened fire first. Nevertheless, the place has slowly moved on from its chequered past and found itself a prominent position for itself on every traveller’s must-visit list. ‘Leo’ – as the regulars call it – is at its best when you throw out the baggage surrounding it and just enjoy your drink, and watch the tourist machine – Colaba – hum to itself.

Café Ideal, Chowpatty
Now if you are a vegetarian, but cannot do without that pick-me-up then Cafe Ideal is your stop. An erstwhile Irani cafe, which serves vegetarian food and beer, it has an ideal location, facing the sea. Hop in for a couple for beers, play some songs on the jukebox and you’re set.

Bayview, Colaba
Formerly called the Starlit Cafe, Bayview is ensconced on the rooftop of the mediocre Hotel Harbour View. With terracotta tiles and mosaic walls, you sure wouldn’t want to go there on a date. But the sea breeze and expansive views more than make up for it. A large bottle of beer will set you back 150 rupees, and there’s tasty Indian and Chinese food on offer to accompany it.

Café Oval, Churchgate
Opposite Oval Maiden in Churchgate is this small-sized Irani restaurant , one of the few remaining in the city, which serves only beer and snacks. Easy to miss out on, because of its location. With cartons of beer stacked up everywhere, you know this is the right place to tank up. As you consider complaining about the cheap plastic crockery and cutlery on offer, remember you’re paying a shade under 100 bucks a pop.

Apoorva Restaurant and bar, Fort
On your way to a plush restaurant, and cannot afford that dent in your wallet with all the alcohol bills at those places. Well, then tank up here before you hop into a plush restro. Located near Fountain, close to Hornimon Circle, Apoorva serves beer and other liquor at a price you must have not imagined of. A large Rum and Coke costs nothing more than Rs 35 or so. Don’t believe us? Walk in and you’ll know. We recommend you accompany your drink with some pomfret, bangra and prawns.

Alps restaurant and beer bar, Colaba
The Alps Restaurant & Beer Bar is a small, slightly seedy, simply decorated place that has laminated tables, hanging lamps, and pictures of Hollywood stars gracing its walls. Head there to chill out over the cheapest pitchers of beer you’ll find in Mumbai. Sensational sizzlers, and fish & chips are also served there.

Café Mondegar, Colaba
When it comes to cafes and bars, for a sheer volume to quality ratio, there’s no beating Colaba. And the first one you’re likely to hit on your trip down the stretch is Cafe Mondegar, or “Mondys” to friends – a blessed refuge to those who are too lazy to bother wading down the stretch. Squeeze yourself into one of the sardine-like tables and revel in the cafe’s relatively untouched and unchanged interiors. If there’s a song you want to listen to, get some change from the cashier and work the jukebox in the corner (or you’ll be doomed to endless replays of The Eagles’ “Hotel California”). And then just settle down to some solid food and drink. The menu’s pretty even, but if we had to pick, we’d recommend a round of chicken lollipop and onion-rings. Mondys is among the last of its breed — the perfect hybrid of Mumbai’s fast-dying Irani restaurants (chequered table-cloths? Check. Netted chairs? Check). Because it has been there forever. But most of all, because it’s the sort of place you can buy a beer at noon in without feeling guilty. And god knows every city needs more of those.

But then imagine a placard that reads free alcohol and you’ll drink until you pee. And if you believe you know of one such hidden gem, feel free to add onto our list.