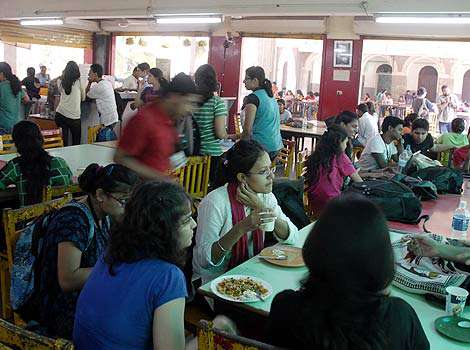 Bindiya Chotrani puts together a list of the most famous and loved college canteens of the city.

Whoever believed that colleges only have a history of making Einsteins and Isaac Netwons of the world need to put another thought to it. Colleges have witnessed more than just that. Maybe some of the greatest love stories, some fun eating competitions, and more. But all of this at an average collegian’s home. Well, we aint giving prizes for guessing. It’s the college canteen.

Bindiya Chotrani puts together a list of the most famous and loved college canteens of the city. Now if you’re a collegian, find out if your college makes up to the list. If a parent, you’ll know what your darling offspring has been upto. If a teacher, you’ll know where to take rounds at. Read on to find more.

Narsee Monjee College of Commerce and Economics
More than a college canteen, this one has evolved into a meeting place over the decades of its existence. From first occupying space between NM and Mithibai College, to living under the cover of NM College, to now sprawling itself across a large area on the ground floor of Usha Pravin Gandhi College of Management building, the canteen has shifted a couple of grounds. The fact that Amar Juice Centre’s sister concern, Aditi Fast Foods holds a monopoly in the new canteen just adds to the glory. The menu has had a facelift of sorts as well, but the constant favourites – idli, masala pav, and grilled sandwiches – still remain on top of the student glutton’s wishlist. If one were to walk into the canteen, strong whiffs of Szechwan sauce and melting butter would invite you to a sumptuous snack. Although the prices may have skyrocketed over the years, there’s no stopping the hungry students from placing an order of their favourites.

Jai Hind College
Befriend the canteen waiter Madan here, and we guarantee you a table within 5 minutes of you dropping in here. Revolving stools, gleaming Formica tables and colourful walls define the place.  Dosas, Sev Puris, Sandwiches, – your wish shall be the waiter’s command. But mostly the Jai Hind Canteen – a melting pot of cultures – is home to the best South Indian fare. The dosas are a number one favourite. Not just that, the college canteen has witnessed movie promotion campaigns and launches too.

Sophia College
The largest college canteen in the city, this one has been here since apeman-age, well almost. The rickety tables and benches cannot hold you back from snacking on the vada pav. The chicken fried rice give tough competition to even an authentic Chinese restaurant. And if on hearing that you’ve almost gotten up from your seats wanting to rush here, well, our own grievance – the canteen does not allow outsiders.

St. Xavier’s College
Chai and vada pav, eating from a plate that was in suspiciously close proximity to cats, juggling 10 cups of tomato soup with 10 sandwiches on a tray, and chocolate truffle pastry that is more often than not out of stock – clearly defines the St. Xavier’s college canteen. From Malhar to Janfest, tiresome days always become better with Manchow soup followed by an omlette pav or maggi with cheese. If an idli sambhar or a dosa doesn’t do you good, there’s the very famous Umesh bhai’s bhel to the rescue. Then the frankie, biryani and cheese palak dosa are reserved for those days when you have barely managed to escape the black list. Every time a glass bottle breaks it is acknowledged by an embarrassing round of applause, and birthdays invariably involve the awkward situation of the whole canteen singing for you and trying to steal some cake. Guitars being strummed in the canteen is a common sight here.

Mithibai College of Science and Arts

Well, even if MIthibai college does not really house a canteen, it definitely need to eb added to the list. Afterall, we never mentioned that these canteens need to be licened by the college themselves.s Take for instance the anand stall, that has the world famous vada pavs, sandwiches and a soda pub. Right besides the anand stall is the dosa wala – from giving your pav bhajis and pizzas a makeover so much so that turn intodosas to simpler basic versions like the Mysore, the cheese sada, the masala dosa, there is a variety that would put even the udipis to shame.

MMK College of Commerce and Economics
And if we can include Mithibai in to the list, how do we then leave MMK college behind. If this name in the list has you wondering as to what could ever be served in the rpemises of the college or even in the vicinity, ask an MMKite. Right from the Jay Sandwich to Loved One’s more fondly called as LO’s to Ravi Chinese, to Jai Jawan to the recently opened up Frankie stalls right outside the college building, there’s no dearth of ‘collegian-food’ if we may call it that. Try the egg fried rice with egg on top at Ravi’s or Prawns Rava Fry at Jai Jawan, we bet you would rather stay a collegian at MMK all your life. And luckily for you, there’s no flashing of ID cards either. Right from students at Thadomal to students at Nationals to the ones at MMK, the food stall welcomes all with open arms.