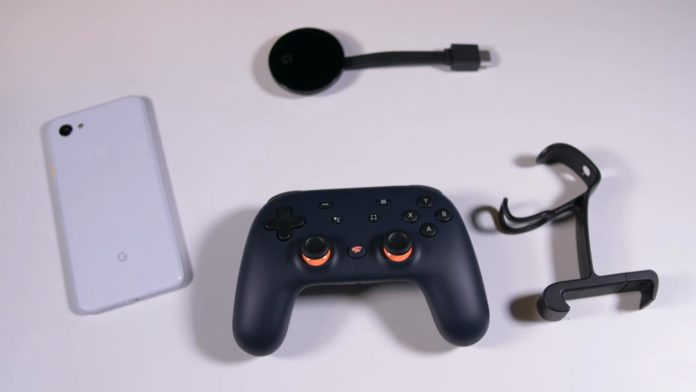 Google Stadia was first announced to the general public back in June during the E3 2019. At the same event, Google’s Chief Executive, Sundar Pichai mentioned Stadia terming it as “a game platform for everyone.” Google launched the Stadia App on November 12th and on November 19th, Google launched the Stadia Consol. With this Google is the first big company to launch next-gen consoles, with Microsoft Project Scarlett and Sony’s PlayStation 5 lined up for launch next year. Interestingly, Google has even sold out the premium pre-order bundle for Google Stadia, called the Founder’s Edition in Europe.

As the company promised, Stadia plays games in up to 4K on your TV, phone, tablet or laptop, with no lag and on existing internet infrastructure. Stadia consol comes with a specially updated Chromecast Ultra. The corners of the gamepad are rounded and the buttons are springy. The Matte black color of the console makes it more beautiful. Bluetooth gamepads like the DualShock 4 and Xbox One Elite also work with Stadia on laptops and phones, but not the TV.

The console can be connected to Chromecast via WiFi to play stadia on TV. If you want to play games on a laptop or smartphone you need to connect the console with a USB cable. Playing Games is smooth once you set your hands on the console. To play games on 4K in TV stadia needs a wifi connection with at least a speed of 35 Mbps. Google recommends 10 Mbps to play in 720p.

If you already have a Chromecast, Stadia will not support it. Stadia works only on Pixel phones for now, but it does not work on a mobile network. The Stadia Consol comes for an initial price of $130 for a hardware starter kit with three months of premium service, and $10 a month afterward. Google has launched the console in 14 countries including the USA, the UK with 22 games.